Glacier National Park is located in the southeast region of British Columbia, Canada. The park covers an area of 521 square miles 1,349 sq km).

Visitors will find massive mountains, lush forests, incredible glaciers, and the largest cave system in Canada with two significant transportation routes.  The Trans-Canada Highway and the Canadian Pacific Railway.  Both routes offer travelers astounding views of the Canadian Rockies and Columbia Mountain Range and access to many of the country’s national parks in the west.

The mountainous region features several impressive summits.  Mount Dawson is the tallest mountain in the park; however, Mount Sir Donald might be more aesthetically renowned.  There are at least 131 glaciers nestled throughout the mountain ranges accounting for 51 square miles (133 sq km) of the park’s area.

There are four significant rivers traversing through the mountains and the national park area.  They include the Beaver, the Duncan, the Illecillewaet, and the Incomappleux.  The rivers give way to some spectacular waterfalls across the park. Additionally, the rivers played a part in the creation of the Nakimu Caves which is one of the largest cave systems in Canada.

The habitat includes rainforest, snow forest, and no forest as described by Parks Canada.  However, the varying habitats give way to an array and abundance of wildlife.

People visiting Glacier often hope to witness some of the wildlife wandering through this wilderness.  Some of the most hopeful predator sightings include cougar, coyote, lynx, timber wolf, and wolverine.  Black bears and the brown bears could be added to this list as well.

Some of the other popular species include caribou, elk, moose, mule, mountain goat, and white-tailed deer.  Golden eagles are the prize sighting of the over 230 species of birds that nest or migrate through the park. 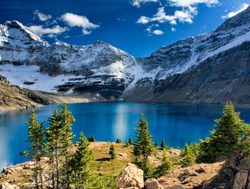 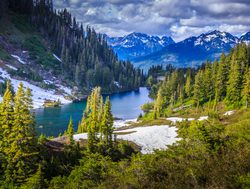 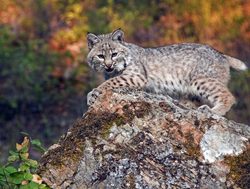 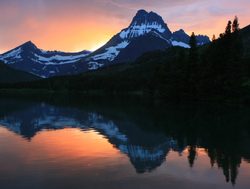 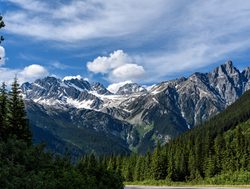 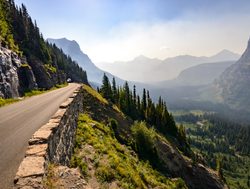 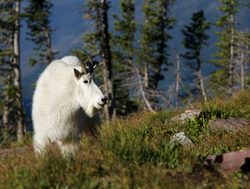 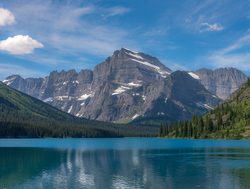 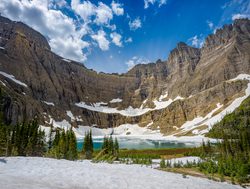 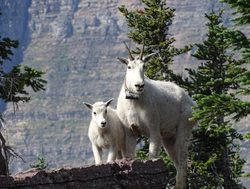 The majestic mountains that serve as backdrops to the meandering rivers, lush forest, and abundant wildlife is collectively a pristine wilderness highlight.  This is one of the premier destinations for mountaineers and climbers, however, it still affords many opportunities for discovery from the traditional traveler.

Mount Dawson is a massif in the Selkirk Mountains and the tallest summit in the national park.  It reaches a peak of 11,079 feet (3,377 m).  Hasler Peak is the tallest of the two summits on the mountain with the second peak being Feuz Peak.

Mount Sir Donald is the more daunting peak in the park.  It reaches a height of 10,774 feet (3,284 m) making it the second-tallest mountain.  Some compare the summit to that of the Matterhorn in Switzerland or Mount Everest in Sagarmatha National Park.  It is incredibly photographic.

The Nakimu Caves are deemed wilderness and the park is committed to keeping them as natural as possible.  They were named from the noise created by the Cougar Brook as it cascaded down into and between sinkholes.  The caves extend across 3.7 miles (6 km) making them one of the largest cave systems in Canada.  The caves are currently closed with research being conducted on the effects experienced by the bats.

Glacier Canada features a well-established system of trails with over 87 miles (140 km) of developed hiking trails.

This is a short easy hike that follows along the Pacific rail-grade. It is a historical outing while also providing views of the terrain.  It covers a distance of (7.2 km).

This is a short 0.75-mile (1 km) easy trail that takes visitors to a scenic view of Bear Creek Falls.

This is an 8.6-mile (13.8 km) trail with an elevation gain of 2,851 feet (869 m).  It is rated moderate. The trail providers hikers with stellar views of glaciers, mountains, and waterfalls.  It is an excellent escape into the wilderness with many rewards.

This is a moderate trail covering 9.7 miles (15.6 km) and an elevation gain of2,427 feet (740 m) while meandering through the rainforest and up through the subalpine forest.

This is a 7-mile (11.4 km) trail with a steep grade ascending 3,143 feet (958 m).  The difficult trail delivers a fantastic reward of panoramic views of the mountains, rock, and glacial ice.