Mammoth Cave National Park is located in the central part of Kentucky.  The park covers an area of 82.55 square miles (213.8 sq km).

Although this cave is larger, it was not the first cave recognized as a national park.  That distinction goes to Wind Cave National Park located in South Dakota.

Mammoth Cave is currently recognized as the longest cave system in the world.  To date, there are no known longer cave systems.  There are caves that have larger rooms or more geological cave formations, but the cave matches the length of this cave system.

One of the primary ways to experience the national park is through cave tours offered by the National Park Service. There are traditional tours through the larger cavern spaces and unique cave formations.  However, for the more adventurous, there are tours that will take you down drop-offs and crawl along between narrow spaces.  These tours are not for the claustrophobic.

In addition to Mammoth Cave, there are another 200 caves across the park that are separate individual caves of the larger cave system.

The Green River and the tributary Nolin River traverse across the park and add to the picturesque landscape that is above ground over the cave.

The cave is home to a series of bat species which include the big brown bat, eastern pipistrelle bat, eastern small-footed bat, gray bat, Indiana bat, and the little brown bat. There are estimated to be over 10 million bats living in the cave.

Wildlife above the cave includes species like deer, coyote, beaver, raccoon, opossum, red fox, and woodchuck. Wild turkey and owls are some of the popular bird species. 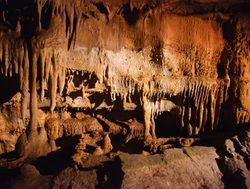 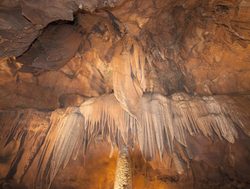 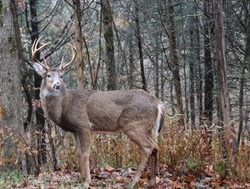 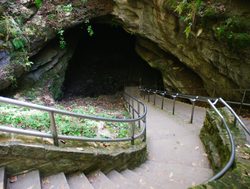 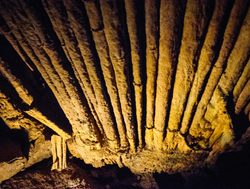 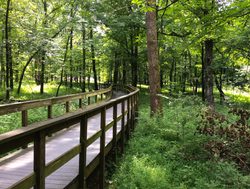 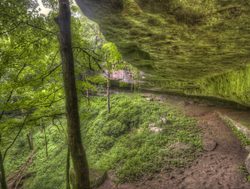 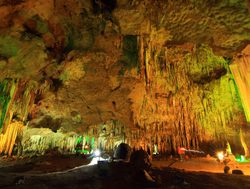 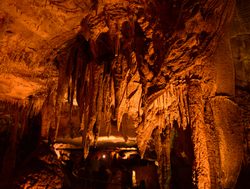 Although the heart of the national park is the cave system underground, there are numerous trails in the scenic wooded area above ground.

This is a moderate rated 4.5-mile (7.2 km) loop trail that meanders along the river out to the bluff of Green River.  Visitors will see a sinkhole, forests, rocky bluff, and riverine terrain.

This is an easy 1.8-mile (2.89 km) developed trail that traverses through the forest and along rocky hillsides.  The elevation gain is minimal.  There is a chance to see wildlife along with the waterways and vegetation.

This is an easy 2.4-mile (3.86 km) trail that follows through the forest out to the Mammoth Dome Sinkhole. It is a serene trail while giving views of an intriguing facet of nature.  The elevation gain is 357 feet (108.81 m).

This is an easy 1.5-mile (2.41 km) loop trail that travels through a forest and along a river providing scenic views along the way. There is a chance of seeing wildlife, wildflowers, and exquisite forested wilderness.