Los Alerces National Park is located along the border of Argentina and Chile, about two-thirds the way down.  The park covers an area of 723.47 square miles (1,873.78 sq km), creating the 4th or 5th largest national park depending on the area attributed to the national park.

The park landscapes are mountainously characterized by moraines, beautiful blue lakes, glacial cirques, alpine meadows, temperate forests, and the renowned alerce forests.  There are several lakes and rivers scattered across the astounding terrain.

The elevation varies from 1,080 feet (330 m) at the Futaleufu along the border up to the summit of Cordon de las Piramides at 8,010 feet (2,440 m).  The varied elevations, diverse vegetation, and forests, combined with the rivers and lakes, create striking picturesque landscapes throughout the park. 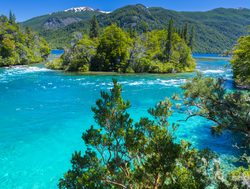 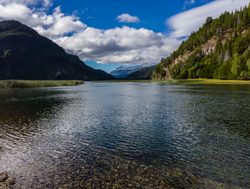 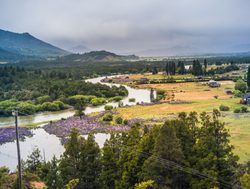 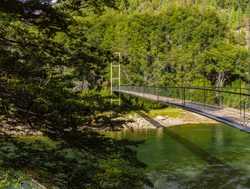 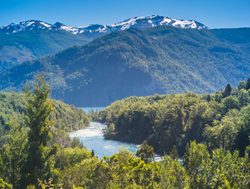 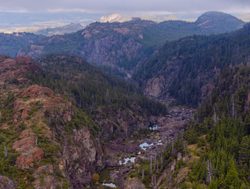 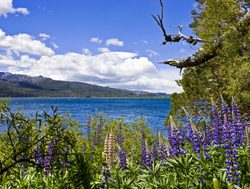 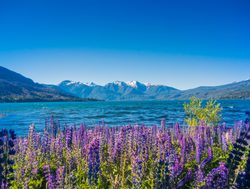 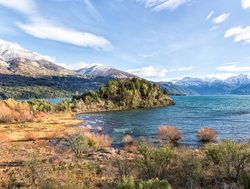 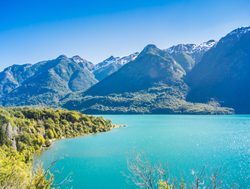 The park is a remarkable collection of Patagonian Andes landscapes and vegetation.  Boating on the lakes is a popular activity, and Torrecillas Glacier can be seen from Lake Menendez's waters.  The incredible sceneries and massive alerce trees are what attract most people to the park.

The alerce trees are massive trees from the cypress family that resemble those of Sequoia National Park in California, United States.  The largest known tree in the park is 187 feet (57 m) tall and 7.2 feet (2.2 m) in diameter.

It is estimated to be 2,600 years old. The alerce trees are the second-longest living species of trees in the world.

The most popular alerce forest is located on the northern end of Lake Menendez.  Boat tours to this region allow visitors to experience this magnificent forest and the park's largest known tree.

Lake Menendez is the most popular lake in the national park.  Boat tours provide views of the Torrecillas Glacier as well as access to the alerce forests on the northern side.  It is actually one of a few lakes created by the Futaleufu River.

You can only experience the lake on foot or by boat.  There are no roads along or out to the lake.  The lake is shaped like a “Y” with Mount Torrecillas nestled in between where the lake divides.  The lake reaches a length of 16 miles (26 km), with about half of that split into the two sections of the “Y.”

Both extensions of the lake feature pristine alerce forest, but the forest on the southern arm of the lark is restricted.  The lake reaches a depth of 942 feet (287 m) with a maximum width of 1.7 miles (2.8 km).

The national park is an excellent place to hike and explore the remarkable wilderness.  Hiking is one of only two ways to reach Lake Menendez.

This is an easy and short 0.2-mile (0.32 km) trail with an elevation gain of only 62 feet (18.90 m).  The trail meanders the short distance through the forest and along the river up to views of the waterfall.

This is a 3.7-mile (5.95 km) trail that features an elevation gain of 807 feet (245.97 m).  It is rated moderate.  The trail treks through the forest and up to higher elevations, where you will find astounding panoramic views out over the lake.

This trail is a partial loop trail covering a distance of 5.1 miles (8.2 km) and featuring an elevation gain of 1,158 feet (352.96 m).  The trail is rated moderate and frequently used for both hiking and camping.  The trek takes you through the forest and up to views of the lake.  There is a chance to see wildlife.

Los Alerces National Park was created to protect a special species of alerce trees known as luhuan.  The park protects the most extensive forest of alerce trees in Argentina.  The area has been declared a UNESCO World Heritage Site.

The Patagonian alerce forest is one of the most pristine forests in the country.  The government and park services have done a tremendous job protecting the area, which features an array of endemic and threatened species of both wildlife and vegetation.

Parts of the alerce forests are even in restricted areas, further protecting that natural and pristine state for future generations.  The tree species are globally threatened, so all efforts need to be made to invest and protect the forests of Los Alerces.