Pinnacles National Park is located in the central part of California closer toward the coast just east of the Salinas Valley. The park covers an area of 41.6 square miles (107.7 sq km).  It is the 5th smallest national park in the 50 United States and 7th smallest when counting US Territories.

The pinnacle rock formations were created from the erosion of a now extinct volcano.  The pinnacles and other rock formations separate the park into two distinct landscapes.  The park is located in the southern portion of the Gabilan Mountain Range.

The landscapes on the western side of the park feature high and steep rock walls.  The rock formations on the east side are more like boulders as well as a prevalence of shade and pools of water.  Bear Gulch Reservoir is one of the stunning watering hole landscapes.

The pinnacle rock formations attract climbers from all around.  Their unique shape, size, and characteristics make for different rock-climbing expeditions.  The elevation varies from 824 to 3,304 feet (251 to 1,007 m).  North Chalone Peak serves as the highest point in the park.

The park also displays deep and narrow gorges that have become caves because of the falling rocks from above building up around their openings.  These talus caves are prevalent in the park because of the unique rock formations and effects of erosion on the land.

The majority of vegetation is accounted for by chaparral which is intertwined with woodlands, riverine, and grasslands.  Canyon live oak, blue oak, and gray pine occur in the warmer elevations.

The pinnacles, rock spires, and rock formations fall into the Hain Wilderness area, which was previously named the Pinnacles Wilderness area. During the months of March and April, wildflowers decorate the rugged landscape adding to the picturesque nature of the park.

The park is not renowned for wildlife, but it is present.  Some of the species visitors hope to see include the elusive cougar, bobcat, coyote, gray fox, and the ever-loving raccoon.  The powerful golden eagle and the enormous California condor are two of the larger bird species found within the park. 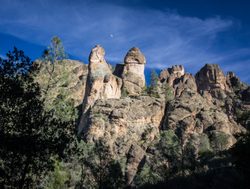 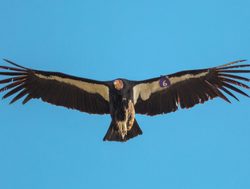 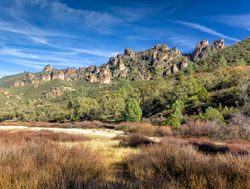 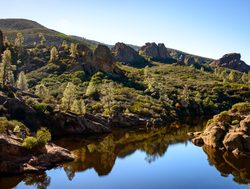 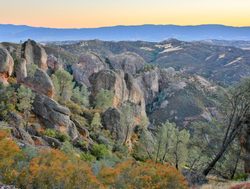 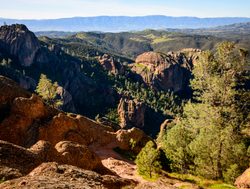 Pinnacles National Park is renowned for its incredible and striking rock formations.  The rock spires, also known as pinnacles, combine with the boulders and astounding rock formations that beckon hikers and climbers.

Their unique shapes and characteristics create climbing challenges that have attracted climbers from around the world.  Developing new routes is one of the highlights of experienced climbers.

There are several trails that have been established for hikers.  The trails allow visitors to hike and view the hills, pinnacles, rock formations, and valleys in a more intimate manner.  The park has more than 30 miles of hiking trails to discover and explore what pinnacles have to offer.

Although this is only a 2.4-mile (3.9 km) loop trail, it is an easy to moderate trail with only 100 feet (30 m) of elevation change.  It does provide some of the most stunning panoramic views of the rock formations below.