There is no road access leading into the national park.  Travelers have to schedule one of the air taxis available from Alaskan cities that deliver visitors to the park.  The remoteness and challenges related to accessing the park make it the least visited national park in the country. Isle Royale and Gates of the Arctic compete for the fewest number of visitors.

Kobuk Valley is comprised of a wide valley with wetlands created by the Kobuk River which meanders through the valley.  The Baird Mountains and the Waring Mountains frame the river and valley in between.

The southern part of the park is recognized as the Kobuk Valley Wilderness.  There is a collection of sand dunes located along the south side of the Kobuk River.  These dunes include the Great Kobuk Sand Dunes, Hunt River Dunes, and the Little Kobuk Sand Dunes.  The dunes cover 32 square miles (82.87 sq km) of the area along the river.

The ecosystem is comprised primarily of boreal forest and tundra and serves as a tremendous habitat for the wildlife in the area.  The caribou are the most prominent species which blanket much of the area with over 400,000 roaming the valley.

Of course, as throughout much of Alaska, chinook, chum, pink, and sockeye salmon are all present. Other sought-after fishing species are present as well. 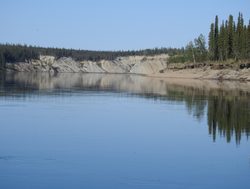 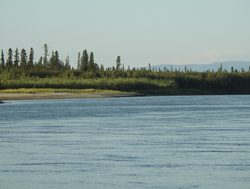 The terrain and caribou roaming across it serve as much of the highlight of this captivating wilderness. One of the highlights for most who venture into this hidden gem is the solitude and tranquility of pure nature void of human interaction.

The caribou is also known as the reindeer.  This species of deer is renowned for its wintery alpine, arctic, and sub-Arctic habitats.  Where else was Santa going to get something to pull his sleigh.

Although Russia is home to the largest herd of caribou in the world with a population approaching 1 million, the herd here in Kobuk Valley is remarkable.

The herd of caribou in Kobuk Valley is the pinnacle wildlife attraction and the population is approaching half a million.

There are no designated trails or hiking routes in the park.  This is remote wilderness exploration and backcountry hiking.  There are no roads or park services inside the park.  All hiking and camping must be done from the food and supplies on your back.