Katmai National Park is located in corner of southwestern corner of Alaska on the Alaska Peninsula.  It is approximately 290 miles (470 km) drive from Anchorage. The park covers an extensive area of 6,395 square miles (16,564 sq km) making it the 4th largest national park in the United States.  Wrangell-St. Elias National Park is the largest.

The other volcanoes of the park include:

The park is mostly renowned for the grizzly bear population which is the largest in the world.  There are approximately 2,200 grizzly bears living within the protected area.  One of the best places to see them is from the observation deck at Brooks Falls.

As many as 70 bears have been documented to visit the falls for fishing the spawning salmon.  One of the most intriguing parts of this experience is identifying the different techniques that each of the bears employs to catch their own fish.

Bears are plentiful, however, some of the most populous areas of the park include Chiniak Bay, Geographic Harbor, Hallo Bay, Kaflia Bay, Kukak Bay, and Kuliak Bay.  The majority of visiting people head to Brooks Camp, which is one of the main developed areas in the park.

Katmai is wilderness and the majority of people are more adventurous in their engagement with what it has to offer.  Typical activities include backpacking, camping, hiking, kayaking, and cross-country skiing during the winter months. 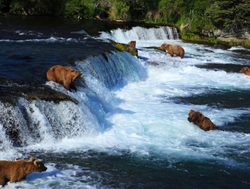 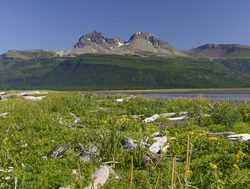 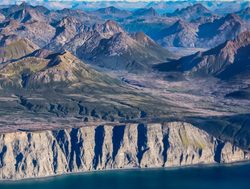 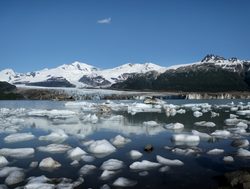 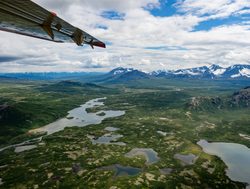 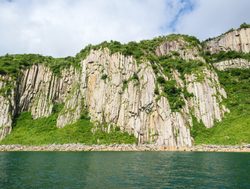 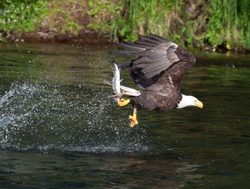 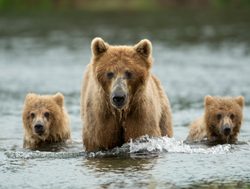 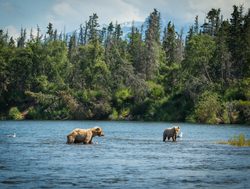 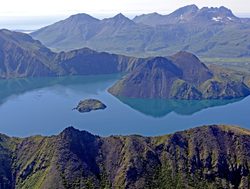 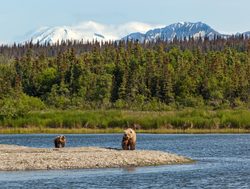 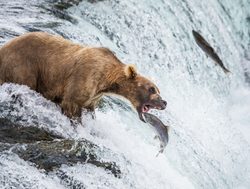 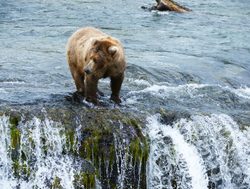 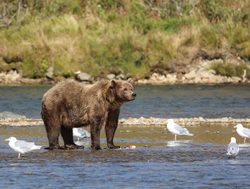 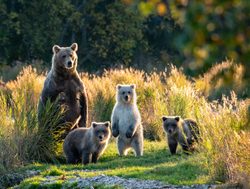 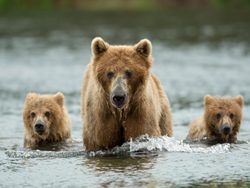 The Katmai area is renowned for grizzly bears and just seeing one is a highlight for most people.  However, the highlights are abundant in Katmai when it comes to grizzly bears.

The area is also abundant with sockeye salmon and one of the most remarkable experiences in sitting in the observation area and watching a group of grizzly bears fishing the rivers for salmon.

The Brooks Falls viewing platform is the place to be when the salmon are spawning upriver.  The majority of videos and pictures of bears fishing come from this region.  The best months for viewing bears occur between July and September.

Although grizzly bears are the highlight, there are another 28 species of mammals found within the park boundaries.  Birdwatchers can keep eyes open for the 137 species of birds that fill the skies.  The majestic bald eagle is a coveted sighting.

The national park was named after volcano Mount Katmai.  Katmai is a stratovolcano reaching a height of 6,716 feet (2,047 m).  It features a large caldera summit with a glacier inside the caldera.  Several other glaciers have formed on the sides of the mountain.

The famous valley was created from the eruption of Novarupta back in 1912.  The valley is covered with ash and thousands of fumaroles vented steam from the ash.  It covers an area of 40 square miles (100 sq km) with the ash reaching depths of 700 feet (210 m).

The fumaroles are now extinct, but the valley is filled with gorges and canyons and stunning landscapes still abound. The valley is also home to abundant wildlife, in particular, the grizzly bear keeping this a popular natural attraction.

Hiking in Katmai is one of the most popular activities.  Trekking through this exquisite wilderness leaves most people speechless.  There are several opportunities for hiking ranging from easy to difficult endeavors.

Backcountry camping and trekking is a common activity for those who truly enjoy the rugged outdoors and the adventure that awaits exploring Katmai.

This short half-mile (0.8 km) trail is accessible to almost everyone.  It provides scenic views near the King Salmon area.

This is an easy outing of 2.9 miles (4.6 km).  It is a wooded trail that takes visitors to Brooks Camp which is where the bear viewing platforms are located.

This moderately rated trail features an elevation gain of 2,400 feet (731 m) with a scenic view looking out over Brooks Camp.  This is 8.2 miles (13.1 km) round trip journey up the mountain.

This is a difficult trail covering a distance of 6.6 miles (10.6 km) through the canyon and gorge filled valley of ash.