Crater Lake National Park is located in the south-central part of Oregon in the western United States.  The park covers an area of 286.29 square miles (741.48 sq km).  Apart from historic sites, it is the only national park in the state.

Crater Lake has the distinction of being the deepest lake in the United States and the ninth deepest in the world.  That statistical significance along with the stunning landscapes that the crater creates made it a strong candidate as one of the Seven Natural Wonders of North America.

One of the most appealing aspects of the lake comes from its rich and vibrantly blue water combined with the various rust colors of the rugged rock walls.  It is an incredible contrast and complement of naturally occurring colors. The rim of crater lake has an elevation that ranges from 7,000 to 8,000 feet (2,100 to 2,400 m).

Mount Scott reaches a summit of 8,929 feet (2,722 m) and serves as the highest point in the national park.  If you adventure up the summit, it provides hikers on a clear day with a 100-mile view as well as a view of the entire caldera all at once.

The national park is comprised primarily of pine and fir trees.  In the late spring and summer months, wildflowers add to the serenity of the park’s beauty.

The natural draw of the park extends beyond the lake and surrounding wilderness.  Wildlife is another feature of the park that travelers hope to experience.  Popular species include badger, bear, beaver, bobcat, coyote, deer, elk, fox, different eagles and hawks, lynx, grouse, squirrels, and chipmunks.  There are several songbirds as well that complement the wildlife experiences.

The most popular activity is the Rim Drive around the lake.  The road travels 33-miles (53 km) around the caldera.  There are various stops along the way which provide some of the most spectacular picturesque landscapes of the lake, rugged caldera walls, and lake islands. 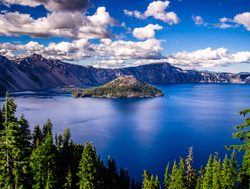 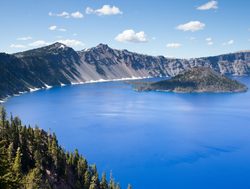 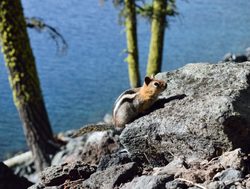 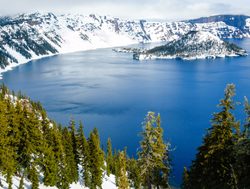 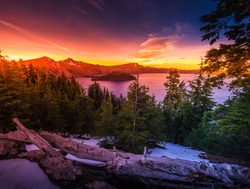 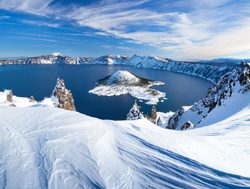 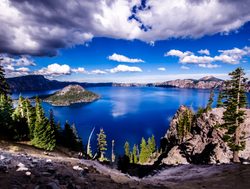 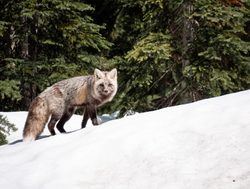 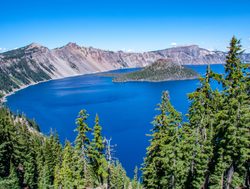 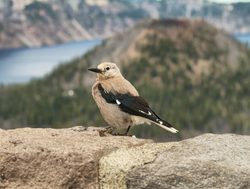 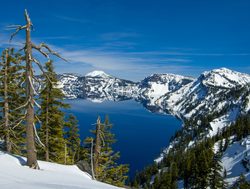 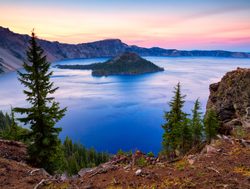 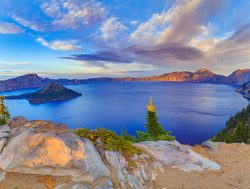 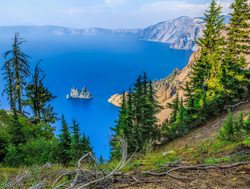 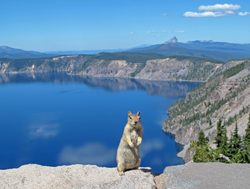 The picturesque landscape of Crater Lake is the highlight of the national park.  The setting is stunning and creates incredible picturesque moments during each of the seasons. 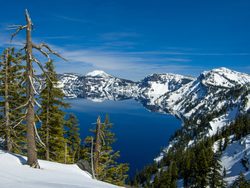 Crater Lake is the pinnacle attraction and draws of the national park.  The lake reaches a depth of 1,949 feet (594 m) making it the deepest lake in the United States and second deepest in North America.

The entire body of water comes from rain and snow runoff with no streams or rivers flowing into the caldera.  Although it can vary slightly based on rain and evaporation, the official lake surface is registered at 6,178 feet (1,883 m).  Snow blankets the rim of Crater Lake about 8 months out of the year.

The lake showcases two islands along the western side of the lake.  The most famous is Wizard Island with the smaller island known as Phantom Ship.  The Wizard Island peak occurs at 6,933 feet (2,114 m), which leaves about 755 feet (230 m) of it above the water.

Crater Lake features over 90 miles (145 km) of available hiking trails.  Here are insights into some of the most commonly engaged trails.

This is the only trail that leads hikers to the shoreline of the lake.  It descends 656 feet (200 m), which means you have to ascend back up after making the trek down.  The entire trail travels a distance of 4.5 miles (7.2 km).  It is considered a difficult trail because of the steep descent/ascent.

This .75-mile trail (1.2 km) hike crosses along a meadow where it ends at Lightning Spring Creek.  The meadows are common feeding spots of deer, so keep your eyes open.  It does have an elevation gain of 250 feet (76 m).

This is a short 0.8-mile (1.3 km) trail that ascends about 420 feet (130 m) and switchbacks that help keep the ascent focused.  The trail provides various views of Crater Lake and Wizard Island.  Several other mountains may be seen as well.

This is one of the more challenging trails in the park.  It features a 1,000-feet (300 m) elevation change of 1.7-miles (2.7 km) where it ends at Garfield Peak.  The trail also provides views of the Crater Lake island known as Phantom Ship.