Yorkshire Dales National Park is located in the northern part of England found amongst the range of the Pennines.  The park covers an area of 324.71 square miles (841 sq km).

The national park is part of an upland region of the larger Pennines.  The Pennines also referred to as the Pennine Hills or the Pennine Chain, are a range of mountains that run along the central part of northern England.  The range and national park extend north from the neighboring Peak District National Park into the area of the Yorkshire Dales.

The national park features a series of dales that reflect the varied river valleys and the surrounding rolling hills.  Most of these dales are named after the river valley, but that is not universal.

Yorkshire Dales is nestled between the norther Pennines, Orton Fells, Mowbray, and the Vales of York.  Most of the area is inside the boundaries of the national park.

Airedale, Malhamdale, Nidderdale, Ribblesdale, Swaledale, Wensleydale, and Wharfedale are considered the more significant dales with at least 15 lesser-known dales.  Swaledale and Wensleydale are in the northern region with the others falling in the southern region.

The dales are characterized by rolling hills and luscious green pastures that are outlined by dry-stone walls.  Sheep or cattle are often grazing in the pastures.  These are all part of the charming scenic landscape that captures the awe of most visitors. 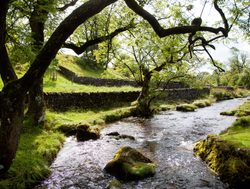 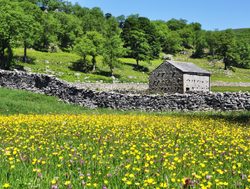 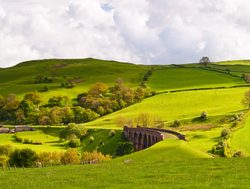 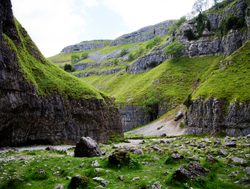 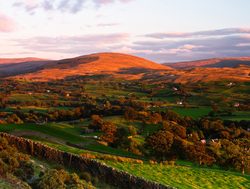 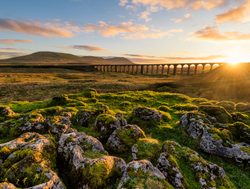 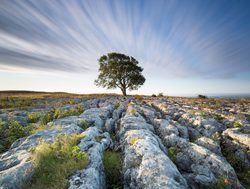 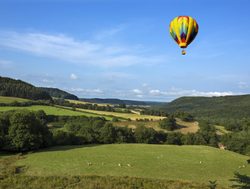 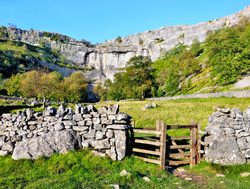 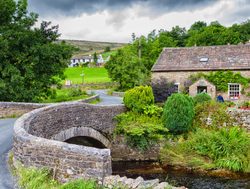 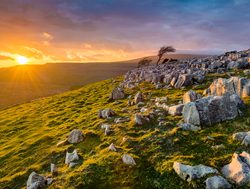 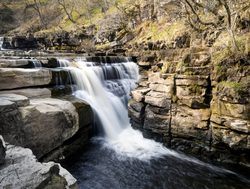 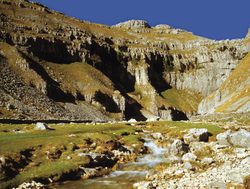 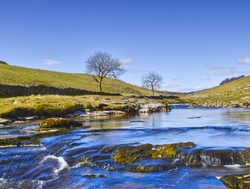 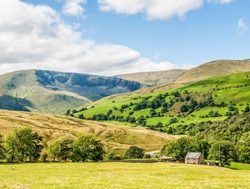 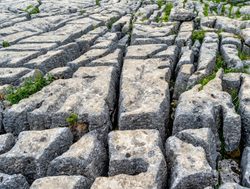 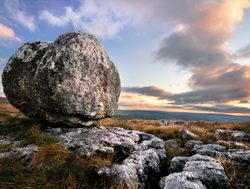 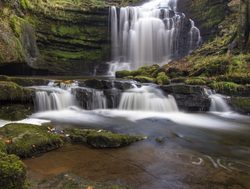 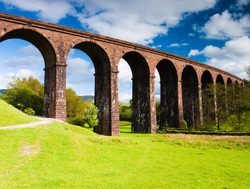 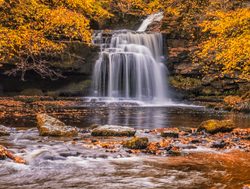 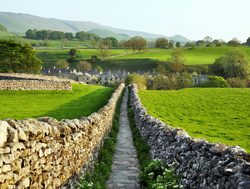 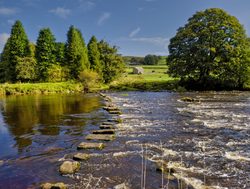 Although not the first or largest national park in the country, Yorkshire Dales is argued as one of the most beautiful picturesque landscapes found in any of the natural parks of the United Kingdom.  Exploring these landscapes whether, by car, bicycle, or on foot is often reported as the highlight of the national park.

The dry-stone walls that outline the pastures of each of the different dales are part of the cultural charm of the landscapes.  There are over 4,971 miles (8,000 km) of these walls traversing across the green pasture rolling countryside scenes.

These dales and dry-stone wall landscapes also speak to the historical and cultural nature of the area and how it has been leveraged for farming, agriculture, and residential living in the small villages.

Aysgarth Falls is a cascading waterfall that features three flights of falls located on the River Ure.  It is surrounded by riverine vegetation which includes a woodland habitat.  The most rewarding view of the falls occurs after a rain that allows the flow to become more significant over the rocky cascade.

There are over 2,500 identified caves scattered across the area with several being open to the public for exploration.  The most extensive cave system is the Three Counties Cave System that stretches 54 miles (87 km).

Ingleborough Cave, Stump Cross Caverns, and White Scar Cave are three of the show caves that draw the most attention by travelers.

The Ribblehead Viaduct crosses through the national park.  It stretches a distance of 1,312.3 feet (400 m) at a height of 104 feet (32 m).  For some, this is a highlight demonstrating the architectural marvels of mankind.

There are numerous trails to access the park's varied landscapes.  The country’s oldest long-distance trail travels through here as it explores the larger Pennines.  The majority of visitors are attracted to the national park with a chance to explore the abundant number of trails that meander across the picturesque landscape.  The trails range from easy to difficult and short to multi-day.

This rated easy 4.1-mile (6.60 km) loop trail passes along wildflowers as you meander through the woods and along a waterfall.  There are chances to see wildlife.

This loop trail circles a distance of 8.0 miles (12.87 km) while ascending 1,778 feet (541.93 m).  The trail provides scenic panoramic views of the landscape as well as views of the Ribblehead Viaduct.  Birdwatching is a popular activity of the hike.

This is a moderated rated loop trail that packs in a lot of the hiker.  Attractions include Janet’s Foxx, Gordale Scar, and the Malham Cove. The trail features an elevation gain of 912 feet (277.98 m) while also passing along a river, waterfall, and chances to see wildlife.

This is a challenging endeavor that will take more than a full day to achieve.  The loop trail covers a distance of 24.5 miles (39.42 km) while ascending and descending amongst the Yorkshire peaks.  There is a total ascent of 5,357 feet (1,632.8 m).  The trail is rated difficult but is considered one of the pinnacle hikes of the park.

This trail has the distinction of being the first long-distance footpath.  The trail covers a distance of 268 miles (429 km) as it travels through, around, and over the Pennines.

Yorkshire Dales National Park was created to protect the area from future human encroachment and development.  The national park protects the rolling landscapes and the picturesque dales and luscious green countryside that is the epitome of tranquil serenity.

The dry-stone walls, rolling hills, green pastures, and the river valleys of the dales are argued by many to be the most beautiful natural areas of the United Kingdom.  The park is here to protect this for future generations.  The greatest threats are human encroachment and disregard of the protected status.