Peak District National Park is located toward the northern part of central England. Although it includes portions of six different counties, the majority of it is situated in Derbyshire.  The park covers an area of 555 square miles (1,440 sq km) creating the 5th largest park in the United Kingdom.  It is a GANP Ambassador Park.

Peak District has the distinction of being the first national park in the entire United Kingdom.  The park represents diversity being comprised of moorland, mountainous, plateaus, limestone plateaus, and gritstone areas.  There are several rivers that meander amongst the rolling hills and support some of the diverse vegetation and countryside.

The park may also be separated into two regions known as the Dark Peak and White Peak areas.  The Dark Peak is characterized by the moorland features while the White Peak area displays the limestone plateaus.  The landscapes include rolling hills, valleys, plateaus, gorges, and striking escarpments.

Kinder Scout is the tallest point in the park reaching a height of only 2,087 feet (636 m).  Although named Peak District, there are no dramatic summits nor striking mountains.  However, there are plenty of rolling hills and sculpted picturesque landscapes.

The Dark Peak and White Peak areas feature varied vegetation including moorland, grassland, and woodland giving way to a variety of wildlife.  Red deer represent the larger species with the majority of wildlife being smaller creatures like the marten, otter, hedgehog, brown hare, and the polecat.  There are a variety of traditional species of birds that nest or migrate through the park. 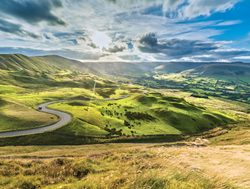 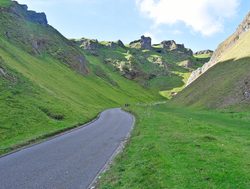 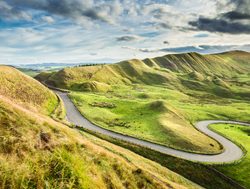 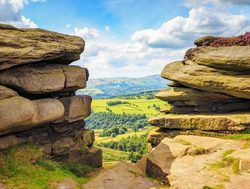 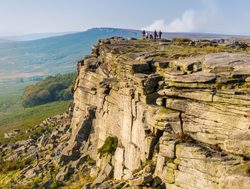 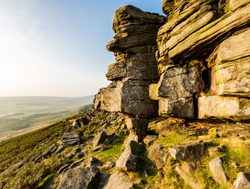 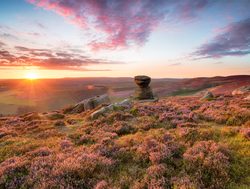 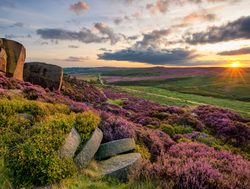 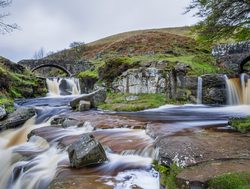 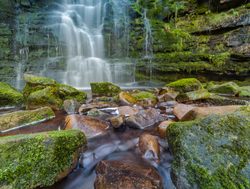 The rolling hills, valleys, and picturesque landscapes and the chance to hike about the area is what draws most people to the park and what many describe as the highlight.  Exploring the rolling hills and the caves are also highlights while some people look forward to the cultural facets of the villages and museums.

There are at least five show-caves in the park which are known as Blue John, Peak Cavern, Poole’s Cavern, Speedwell, and Treak Cliff.

There is a stream that runs through Peak Cavern and most of the caves display some cave features like stalactites and stalagmites.  Peak Cavern is the largest and most significant cave of the different caves.

The Derwent Valley Mills is a World Heritage Site that represents the modern factory technology established in the 18th century.  The National Tramway Museum is located in the village of Crich and features over 60 trams that were constructed between 1873 through 1982.

One of the primary activities of the national park is hiking throughout the wilderness and between the towns and villages.  There are over 1,800 miles (2,900 km) of trails that traverse through, around, and over the varying landscapes of the park.

This is a loop trail that is rated moderate.  You will traverse the terrain covering a distance of 7.7 miles (11.42 km).  There is an elevation gain of 1,541 feet (469.70 m).  The trail can be rocky, but it provides good views of the rolling hills, green countryside, a river, and opportunities for birdwatching.

This is an 8.8-mile (14.16 km) loop hike that features an ascent of 1,663 feet (506.88 m).  Hikers will be able to birdwatch and see wildlife while capturing views of a river, the lake reservoir, and the rolling hill landscape.

This ascent up the tallest point in the park is a loop trail traveling 8.9 miles (14.32 km) while ascending 1,788 feet (544.98 m).  Along with the satisfaction of reaching the highest point, you will find panoramic views of the region.  The loop trail is rated difficult.

This loop trail is a multiday endeavor covering a distance of 190 miles (310 km).  The trailhead is considered to be at Buxton and from there and, for the most part, travels along the boundary of the park.

The primary purpose of the park is to protect the rolling hills and diverse landscapes from further development of inhabitants.  The largest struggle comes from trying to balance the desires of the residents living in the area, the wishes of the travelers and visitors, and the efforts to protect the area.  It is a constant juggling act.

The park is committed to protecting the wilderness that surrounds the various towns and villages while trying to maintain an additional commitment by providing ways for visitors to experience the natural outdoors and exquisite nature of the moorland and upland areas.