Mount Muhabura: This extinct volcano sits are the border between Rwanda and Uganda with a peak of 13,540 feet (4,127 m).

Mount Gahinga: This probably extinct volcano rests on the border between Uganda and Rwanda and has a summit of 11,394 feet (3,473 m).  The mountain is the home and namesake of the neighboring Mount Gahinga National Park in Uganda.

Mount Sabyinyo: An extinct volcano with shared borders of the Democratic Republic of the Congo, Rwanda, and Uganda.  The shared border point occurs at the peak area at a height of 12,037 feet (3,669 m).  This is also the location where the three protected areas of Gahinga National Park (Uganda), Volcanoes National Park (Rwanda), and the Virunga National Park (DR Congo) all converge together.

The Volcanoes National Park region served as one of the bases for Dian Fossey as she conducted her research as a primatologist.  The mountain gorilla is king in this area; however, the golden monkey is another primate that visitors might get the chance to see.

For all practical purposes, the area is consumed by forests.  The type of forest varies by elevation, but the Virunga Mountain region is thick with jungle.  However, there are grasslands, meadows, marshes, and swamps in the lower elevations.  The bamboo forest is also prominent amongst the evergreen jungle.  It is the epitome of the Tarzan wilderness experience.

The rainforest is home to over 200 species of birds which adds to the serenity and excitement of trekking through the mysterious jungle while tracking the mountain gorillas.  Around 10% are endemic species adding to the uniqueness of this jungle trek.

The rivers that traverse through the park are home to approximately 20,000 hippopotamuses, so your odds are pretty good at seeing these as well. 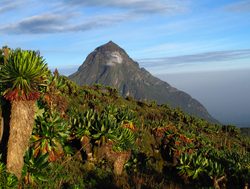 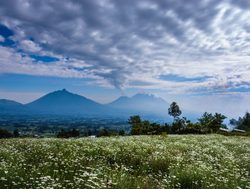 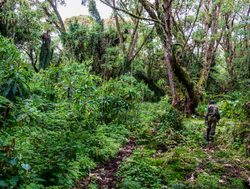 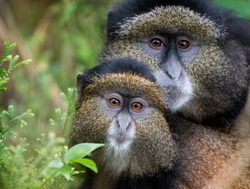 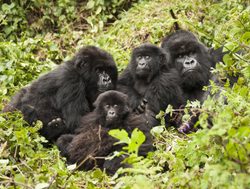 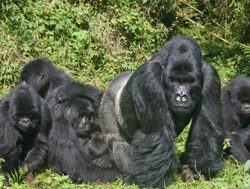 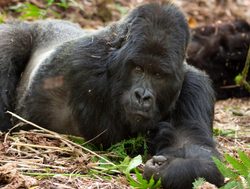 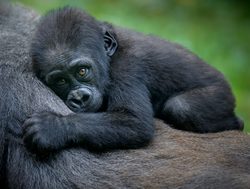 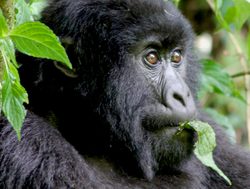 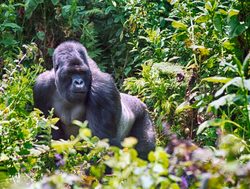 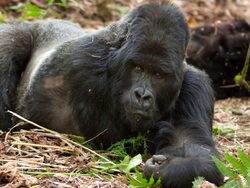 The primary reason that anyone travels to Volcanoes National Park is to experience the mountain gorillas.  It is one of the few places where the mountain gorilla, one of Africa’s Big 7, can be seen.  It is awe-inspiring to encounter these magnificent creatures up close.

The mountain gorilla is the largest primate species in the world and having the opportunity to be amongst them leaves most people speechless.  Some are speechless out of fear of startling these muscled giants, while others are speechless out of awe and wonder.  No matter what, being with the magnificent creatures is a highlight for all who engaged in the exploration of Volcanoes National Park.

The majority of people are looking to experience the mountain gorillas.   This is accomplished by trekking on one of the guided safari adventures that are available.  However, there are other trails that visitors may explore in the national park.  Only four of the volcanoes in the park allow for hiking.

This is one of the most popular trails.  The ascent up the volcano takes hikers to the crater lake which is a picturesque landscape.  It takes about 4 to 5 hours to ascend depending on your pace and another two hours to come down making the round trip between 6 to 7 hours long.

This trail is also located on Mount Bisoke, however, it is easier with less of an ascent.  It takes about 4 to 5 hours to make the round trip journey and visitors will see Lake Ngezi sitting between Mount Bisoke and Mount Gahinga.

This mountain sits at the end of the volcano chain of mountains with a roundtrip trek taking between six to eight hours depending on fitness and ability.  Hikers who venture up the mountain are rewarded with stunning views of the volcanic mountain range and twin lakes of Burera and Ruhondo.

African Travellers Ltd is an eco-friendly and sustainable tour company serving Volcanoes National Park in Rwanda and others in East Africa with a commitment to the environment.

Red Rock Rwanda is an Ecotours organization delivering responsible tour and trekking services while remaining commited to sustainable tourism through viable community and conservation programs. They are invested in the mission of the Alliance and in good standing.

Virunga Ecotours is a Responsible Travel and Ecotourism company uniquely situated to deliver sustainable gorilla tracking services in Volcanoes National Park.  They are in good standing and have an active commitment to the environment

Volcanoes National Park was created to protect the habitat of the endangered mountain gorillas.  The government is committed to maintaining the protected area and investing in these magnificent creatures.  This is a cooperative effort with neighboring countries and neighboring national parks.

The mountain gorillas are a threatened species and it is imperative that the global community do all possible in protecting them from further decline.