Virunga National Park is located eastern part of the Democratic Republic of the Congo as part of the Albertine Rift Valley.  The national park extends across an area of 3,120 square miles (8,090 sq km).  It is a GANP Ambassador Park and serves as the most popular national park and natural attraction in the country.

The elevation of Virunga National Park varies from a low of 2,230 feet (680 m) to the peak of Mount Stanley at 16,762 feet (5,109 m).  The Semliki River runs through the valley of the Rwenzori Mountains.  Savanna and montane forest are common in the area.

Nyiragongo Volcano: is an active stratovolcano with a summit of 11,384 feet (3,470 m).  The volcano is comprised of solidified ash, hardened lava, and lava rocks that are remnants from previous eruptions.  This contains the world's largest volcano lake.

Nyamuragira Volcano:  This volcano differs from its neighbor Nyiragongo. This is a shield volcano comprised of historical lava flows.  Although the volcano is rising gradually, it currently has a peak of 10,033 feet (3,058 m).

The majority of Lake Edward resides inside the national park before traversing into neighboring Uganda. This is one of the great lakes of the Western Rift Valley.  The lake surface level is at an elevation of 2,992 feet (912 m) while stretching 48 miles (77 km) long and 26 miles (42 km) wide.  It is shared with Uganda.

The ecosystem accounts for 300 endemic fauna and flora species.  There are over 2,075 species of plants with 264 species being the various trees that make up the jungle.  African alpine bamboo is also commonly seen within the park.

Wildlife consists of 196 species of mammals, 109 species of reptiles, and 65 species of amphibians.  The most popular are the primates with the mountain gorilla being the pinnacle.  Other primates include blue monkey, chimpanzee, De Brazza’s monkey, Dent’s mona monkey, golden monkey, grey-cheeked mangabey, Hamlyn’s monkey, olive baboon, red colobus, and the red-tailed monkey.

Bird watchers will be ecstatic with approximately 706 species of birds found within the national park jungles and surrounding terrain. 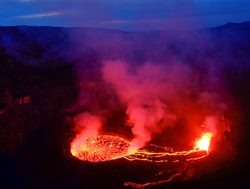 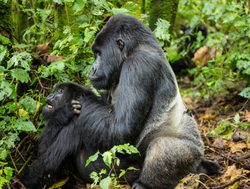 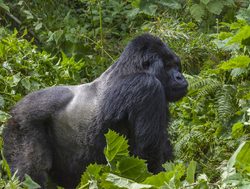 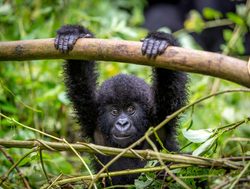 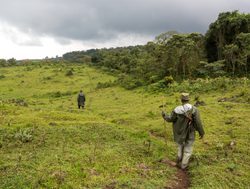 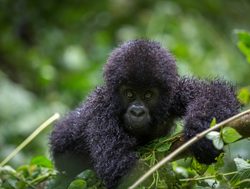 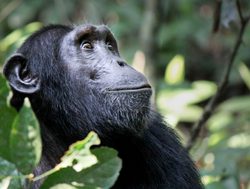 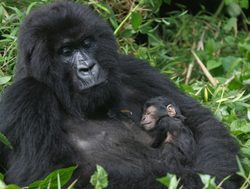 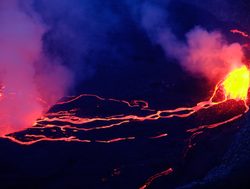 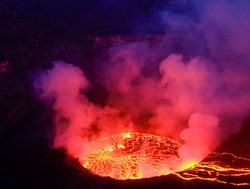 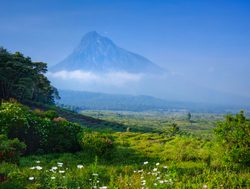 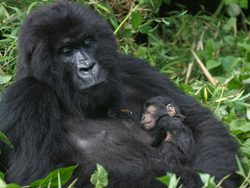 A safari through the wilderness of Virunga National Park is a special treat for visitors.  However, the highlight of a visit to the DRC’s leading national park is a sighting of the mountain gorillas.  People travel from all over the world to experience these majestic creatures up close.

Mountain Gorillas are magnificent creatures with incredible strength.  They are one of Africa's Big 7.  They are the largest primate, and their power can be on full display.  They are also gentle, loving, playful, and caring.  Hikers are often mesmerized and left standing in awe.

The majority of hiking in Virunga National Park occurs as trekking with guides to experience the mountain gorillas.  There are different trails and groups are created based on time, experience, and accessibility.

This is an excursion up to see the lava lake of Nyiragongo Volcano.  This is a long day's climb up depending on fitness and ability levels.  The journey up usually takes between four to six hours with another four hours for the descent.

You will travel through dense forest and across old lava flows before making the final ascent.  The last 984 feet (300 m) to the summit is steep so be prepared.

Oloukos Signature is a sustainable and specialist holiday outfitter with a focus on nature and conservation creating signature experiences in Eastern and Central Africa.  Our highly devoted team has unmatched and personal on-the-ground knowledge that elevates their guiding services.  Our core elements are conservation, community, and commerce.