Tongariro National Park is located in the middle of the North Island of New Zealand. The national park boundaries encompass an area of 307.3 square miles (795.9 sq km).

This UNESCO World Heritage Site was the first national park created in New Zealand and the 6th created in the world. Ngauruhoe, Ruapehu, and Tongariro are three active volcanoes located with the park boundaries.

Ruapehu is the tallest at 9,177 feet (2,797 m) and Ngauruhoe shaped much like a traditional volcano with a near symmetrical cone shape. The Tongariro Alpine Crossing is renowned as a 1-day hike across the range.

Lake Taupo is the largest lake in New Zealand and the second-largest freshwater lake in all of the continental regions. The status is based on the surface area with the lake covering an area of 238 square miles (616 sq km).

Tongariro National Park is home to 7 different towns, which is unusual for most parks. The park is not known for its wildlife, but red deer, possum, rabbits, and rodents are possible sightings. There are 56 species of birds found within the park. 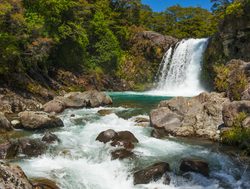 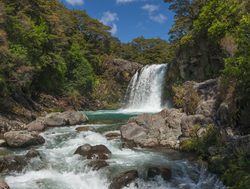 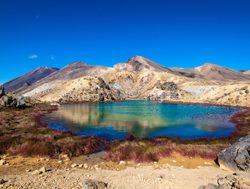 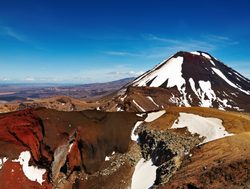 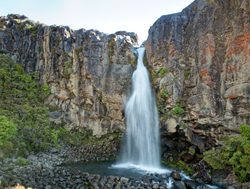 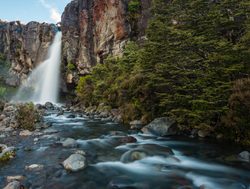 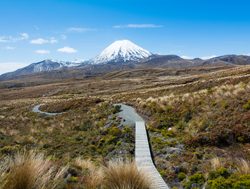 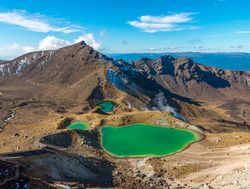 One of the easiest ways to experience the highlights of the park is by a scenic drive through the abundance of well-maintained roads.

Mount Tongariro and neighboring peaks served as one of the filming locations for the Lord of the Rings. There are numerous trails and places to hike, however, the most famous and worthwhile endeavor is the 1-day trek across the Tongariro Alpine Crossing.

Tongariro Volcano is a fairly symmetrical cinder volcano reaching a summit of 6,490 feet (1,978 m). The volcano serves as the namesake of the national park. 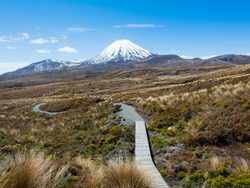 Ruapehu is a second near-perfectly symmetrical cone-shaped volcano. At 9,177 feet (2,797 m), it is the tallest volcano in the national park.  It is an active stratovolcano that is extremely picturesque.

It is distinguished for being the tallest active volcano in New Zealand as well as the highest point located on the North Island. Of the three peaks, Tahurangi is the highest of them on the mountain.  Crater Lake is found between the three peaks where it holds water and serves as a lake in between eruptions.

This crater lake is not the same as the renowned Crater Lake located in Oregon which is the deepest lake in the United States.

Ngauruhoe Volcano is another stratovolcano located within the range across the North Island.  It reaches a summit of 6,489 feet (1978 m).  Although not as well known, it is another scenic volcanic landscape adding to the astounding nature of the park. 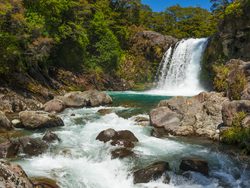 Tawhai Fall is a waterfall that may be accessed from a short hike.  It looks like it out to be in an Indian Jones or Tomb Raider movie set.  The falls reach a height of 42.65 feet (13 m).  It is well worth the effort to go and see and is a highlight for most visitors who embark on the journey.

There are over 25 spectacular hiking trails that wander about the national park and provide visitors with views fo the many different stunning natural wonders.  Tongariro invites you to wander about her wonders.

This is a moderate rated 3.6-mile (5.79 km) loop trail with an elevation gain of 495 feet (150.8 m).  The trail takes hikers past a striking waterfall that plunges between a break in the towering rock-faced cliff.

This is a longer moderate rated trek across the heart of the park.  It features an elevation gain of 2,690 feet (819.9 m) across 12.1 miles (19.47 m).  The trail takes you up into the mountainous terrain that engages views and perspectives of the volcanoes that make up the national park.

This is a moderate rated 13.3-mile (21.40 km) loop trail that traverses across the terrain out to views of the Tama Lakes.  There is an elevation gain of 1,883 feet (573.93 m) with some of the steeper parts occurring as you approach the lake.  The rocky terrain can be slippery.  The views are amazing and this journey is another trek that really gives a taste for the splendid nature in the park.

This is a challenging trail over 7.3 miles (11.75 km) with an ascent of 3,494 feet (1,065 m). In addition to the panoramic views of the terrain, hikers that make the ascent are rewarded with views looking out over Crater Lake.