Arenal Volcano National Park is located in the middle of Costa Rica and it covers an area of 29,692 acres. Along with Mount Arenal, there is a second volcano named, Chato, found within the park boundaries.

Mount Arenal reaches a summit of 5,357 feet (1,633 m) with Chato coming in at 3,740 feet (1,140 m). Although Arenal is the highlight, Chato features a collapsed cone and stellar lagoon inside the caldera that most visitors enjoy seeing.

Lake Arenal lay at the base of the volcano creating a picturesque view of the two together. The volcano was thought to be dormant until a significant eruption occurred in 1968. For much of the time since it has displayed some level of activity. Only recently, has it returned to a more dormant state.

The park is part of a larger Arenal Tilaran Conservation Area which encompasses 790 square miles (2,040 sq km). It was established in 1991.

Arenal Volcano National Park is one of 26 national parks in Costa Rica which collectively accounts for 23.4% of the country’s land area and 43% of the tourism is attributed to ecotourism. Other leading national parks include:

There are over 850 species of birds found within the park. Bird lovers can scour the park area in hopes of seeing the endangered resplendent quetzal, famous for its colorful plumage.

Some of the sought-after wildlife viewings include the jaguar, deer, monkeys, capuchin monkeys, and coati. Monkeys are the most likely wildlife to witness apart from the abundance of birds. Flora enthusiasts can anticipate coming across orchids, heliconia, ferns, laurel, palms, bromeliads, and many others.

The rainy season occurs between May through January, with the dry season only existing between February through April. The good news is most of the rains are short afternoon occurrences.

The Caribbean Sea and the Pacific Ocean both influence the weather and account for much of the rainy season. The temperatures fluctuate between 69.8oF to 81.5oF. The warmer days can feel rather muggy with the humidity. 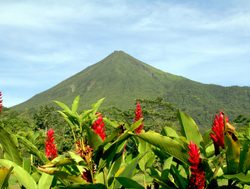 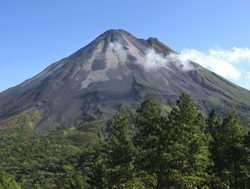 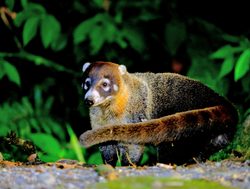 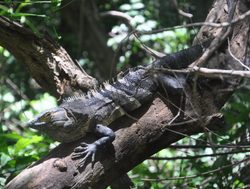 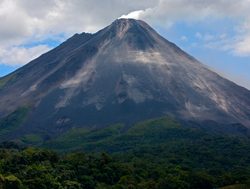 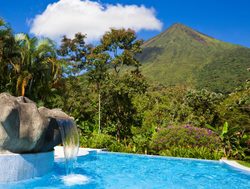 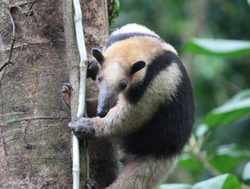 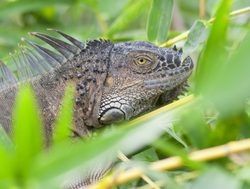 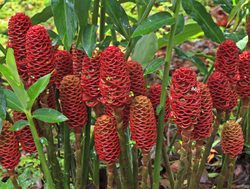 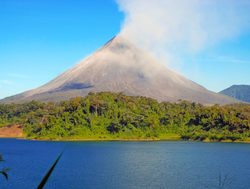 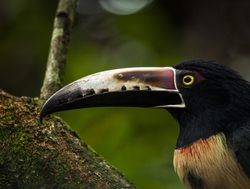 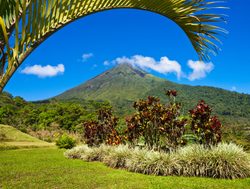 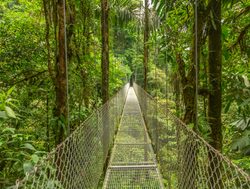 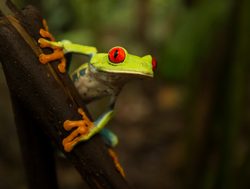 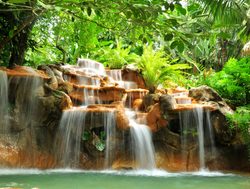 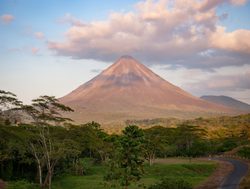 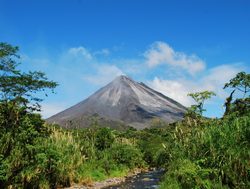 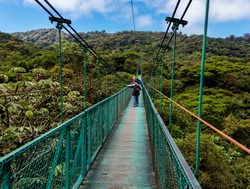 The highlight of what visitors can expect to see during their visit to Arenal Volcano National Park is the varying views of the Arenal Volcano. There are several viewpoints including a restaurant right at the foot of the volcano.

The Tabacón Hot Springs is one of the best ways to relax, experience the beauty of Arenal and the surrounding rainforest, and rejuvenate from a day of exploring. 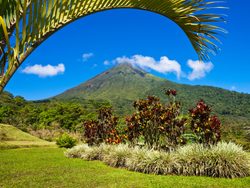 The Arenal Volcano has been renowned around the world for its consistent activity.  Although it was not large explosions of lava, there was consistent steam and eruptions of occasional rocks. This activity has become dormant since 2010.  The volcano and neighboring lake are one of the most exquisite volcanic landscapes.

There are several different places around the volcano to capture astounding photographic images.  Any visit to Costa Rica should include a trip to Arenal Volcano National Park.

Visitors may choose from luxurious spa resorts, traditional hotels, and economy lodging when they come to explore one of Costa Rica's best attractions.  Below is a list of accommodations that the GANP recommends:

Tabacon is a five-star resort and hot springs nestled in the rainforest at the foot of Mount Arenal providing one of the most tranquil stays for those visiting Arenal.

There are many places to choose from to serve as your accommodations while visiting the park.  Below is a list of hotels, you may want to explore further:

The national park and surrounding area provide visitors with a variety of things to do.  Exploring the rainforest, shopping and dining in the local culture, and relaxing in the hot springs are some of the favorites.

The Tabacon Hot Springs feature a tranquil rainforest environment with a series of streams and pools heated by mother nature.  It is truly a paradise.

Strolling through the luscious garden paths or soaking in the warm waters while listening to the waterfalls is one of the most relaxing and rejuvenating experiences.

Take the aerial tram up to the top where you will find an observation deck providing you with panoramic views of the pristine wilderness.  This also provides you access to the zipline for the more adventurous.

If you wanted to be a bird flying around Mount Arenal, now is your chance.  The zipline will take you through the rainforest while providing you with views of the rainforest and amazing fresh air.

Hiking around Arenal Volcano is about experiencing the tropical forest as well as capturing different and unique views of Mount Arenal.  Short trails ranging from 2 km to 3.4 km allow visitors to explore the forest and lava fields of previous eruptions.

This is an easy rated trail that is 2 miles (3.21 km) out and back through the jungle along Mount Arenal.  There is minimal elevation gain with a chance to see wildlife, experience dense jungle, and bird watching.

Arenal Volcano National Park was created to protect the rainforest and wilderness surrounding Mount Arenal which is one of the most popular tourist destinations in the country.  It was imperative that the country establish this protective area in order to help ensure the survival of the species that live in the rainforest terrain.

The protected area is home to more than 850 species of birds with some being endangered.  Jaguar, deer, and other wildlife have a better chance of thriving within the protected boundaries.