Tayrona National Park is located in the Caribbean part of northern Colombia. The national park encompasses both land and sea areas to make up the park. The land accounts for 58 square miles (150 sq km) while the protected sea area accounts for 12 square miles (30 sq km).

The elevation ranges from sea level to 2,952.76 feet (900 m). Tayrona National Park features the ecological diversity of the Sierra Nevada de Santa Marta mountain range. It is the second most popular national park within the country of Colombia.

Wildlife in the park includes over 105 species of mammals, 15 species of amphibians, 31 species of reptiles, and at least 300 species of birds. There are over 70 species of bats with the Mantled howler, deer, and the oncilla being popular animal sightings. The montane solitary eagle and the military macaw top off the bird species.

The marine part of the national park protects the country’s Caribbean coral reef. There are two other protected coral reefs, however, Tayrona is the only national park. The coral reef features 110 species of corals, 202 species of sponges, 700 species of mollusks, and over 400 species of sea and river fish. Colombia has over 340 endemic species and 44 of those are located here in Tayrona. 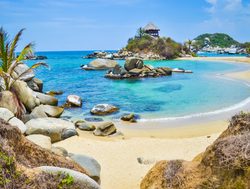 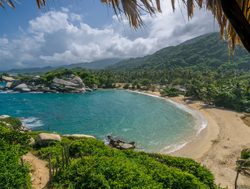 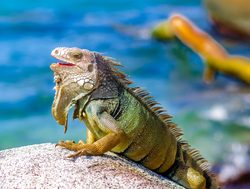 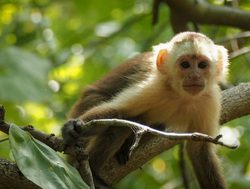 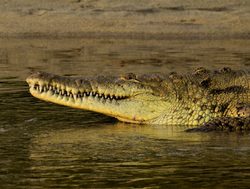 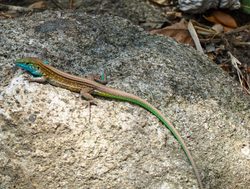 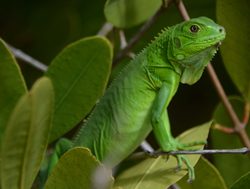 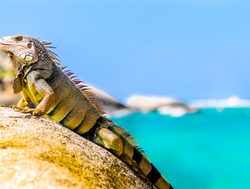 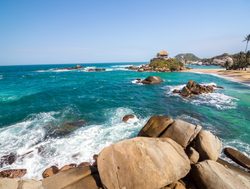 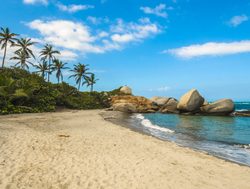 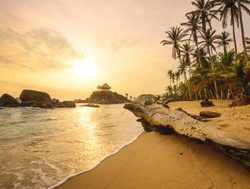 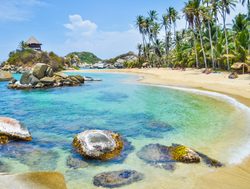 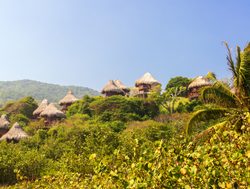 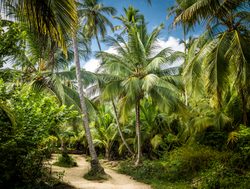 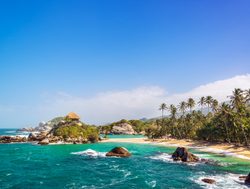 Tayrona National Park is the second most visited national park in Colombia. It provides visitors with an opportunity to explore nature found on land as well as beneath the sea. The area is known for strong currents and riptides, so snorkeling should be done with great care and only by experienced swimmers. It is not considered a safe swimming beach, but it does offer beautiful scenery.

The mountains are one of the pinnacle features of the park and serve as one of the leading highlights.  The Sierrra Nevada de Santa Marta has much to display and share with visitors.

The Sierra Nevada de Santa Marta mountains are one of the world's highest coastal mountain range.  This is not part of the Andes and serves as its own unique mountain range.

It is debated whether Pico Cristobal Colon or Pico Simon Bolivar is the tallest summit in the range. These Sierra Nevada mountains cover an area of 6,600 square miles (17,000 sq km).  The massive but isolated range of mountains spawns 36 different rivers. The ecoregions of the mountain range include montane forests, moist forests, dry forests, cloud forests, and subalpine and alpine terrain.

There are several ways to hike and explore the Sierra Nevada mountains of Tayrona.  Many of the trails are short and easy, but it does have moderate and difficult ones as well.

This is an easy 1-hour trail traveling between Canaveral and Arrecifes.  It provides views of the coastline and Caribbean waters while meandering through the coastal forests.

This is another 1.5-hour trail that is also rated easy and provides additional coastal views and experience in the forests.

Tayrona National Park Trail: This is one of the park's main trails.  It features an elevation gain of 1,883 feet ( m) and is a challenging but moderate rated point-to-point trail that covers a distance of 8.8 miles (14.2 km).  It provides scenic views of the coastline while meandering through the different forests. There is a chance of seeing wildlife found in the park.