Villarrica National Park is located just north of the cental part of Chile along the border of Argentina. The park encompasses an area of 243 square miles (630 sq km).

The foundation of the park is found in the three volcanoes known as Villarrica, Quetrupillan, and Lanin.  The Lanin volcano is on the border between Chile and Argentina, and this volcano serves as the focal point for the neighboring Lanin National Park in Argentina.  The park is part of the Andes Mountain Range.

Lanin Volcano is the furthest east and tallest of the three landmark volcanoes.  It reaches a summit of 12,388 feet (3,776 m).  There are other mountains within the park ranging from heights of 1,969 feet (3,776 m) up to the highest point on Mount Lanin.

Tolten River and Valdivia River both run through the park boundaries.  As with many of Chile's national parks, the heart of the vegetation is Valdivian temperate rainforest.  This ecosystem is characterized by by dense underbrush, climbing vines, bamboos, ferns, and by evergreen flowering trees.  The park is further characterized by caves, rivers, and lagoons.

The wildlife is diverse with some of the more popular species including kodkod, Andean fox, culpeos, chillas, gray foxes, red foxes, pudues, mountain monkeys, and the allusive cougar.  Bird lovers can look to the skies for the peregrine falcon, black woodpecker, black necked swan, condor, and the Chilean pigeon. 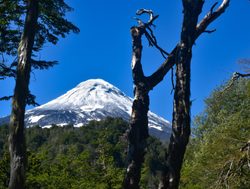 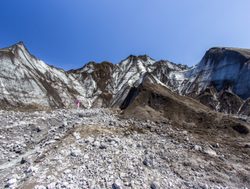 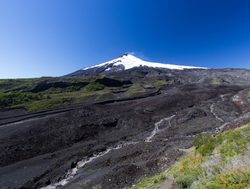 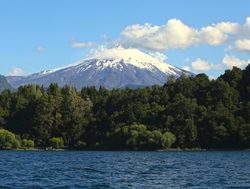 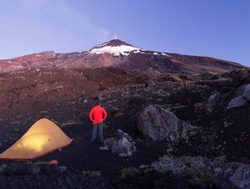 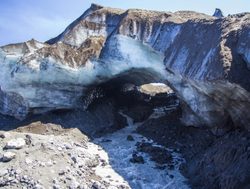 The three leading volcanoes are the heart of the national park with each creating striking landscapes.  Individually and collectively, they are often the highlights of any trip to the park.

Villarrica Volcano is a stratovolcano reaching a summit of 9,380 feet (2,860 m).  The astounding volcano serves as a backdrop overlooking Lake Villarrica and the town of the same name.

It is the westernmost of the three massive stratovolcanoes with Lanin being the furthest east and Quetrupillan falling between the two.  It is also called Rucapillan which locally translate to "great spirt's house."

The summit is permanently covered with snow and ice with an abundance of glaciers.  It is one of the country's most active volcanoes.  It is a coveted destination for adventurous hikers ready to trek up or leverage one of the guided hikes.

Quetrupillan Volcano is one of three large stratovolcanoes.  It is situated between Villarrica and Lanin volcanoes.  It reaches a peak of 7,740 feet (2,360 m).  The summit caldera is found with a larger caldera atop the mountain.  This volcano is also blanketed with ice over the summit region, however the glacier is shrinking.

Lanin Volcano is a stratovolcano sitting on the border of Chile and Argentina.  This volcano is situated within two national parks, Villarrica in Chile and Lanin National Park in Argentina.

The summit reaches a height of 12,388 feet (3,776 m) making it the taller of the three volcanoes.  There is a scenic view of the volcano found on Mamuil Malal Pass.

Skiing, mountaineering, mountain biking, and volcanic cave exploration are some of the popular activites.  Just imagine, you could be skiing on one of the country's highest and most active volcanoes.

Hiking is one of the most popular activities for summer visitors.  There are several trails to help you explore the splendor of the landscapes and tranquil forests.

This is a 3.1 mile ( km) moderate-rated trail that features an elevation gain of 1,364 feet ( m).  The hike meanders up through the forest delivering stunning panoramic views.

This 5.0 mile ( km) trail delivers an elevation gain of 1,604 feet ( m).  The trek takes you out to Pichillancahe glacier which is the most accessible in the park.  Trekking through the forest out to remarkable views of five different volcanoes.  There is a chance to see wildflowers and wildlife.

This is a difficult ascent covering 5.6 miles ( km) with an elevation gain of 4,655 feet ( m).  You are required to leverage guides form a local company to make the ascent.  The volcano is snow-capped so you will be using snowshoes on part of the journey.  Top it off with a sled ride down.  The trek is rated hard and features rocky and snow-covered terrain.  There are chances to see wildlife along the way.

Villarrica National Park was created to protect the pristine landscapes of the striking volcanoes and the surrounding Valdivian temperate rainforest.  In protecting the landscapes and habitats, the park is also protecting the homes for a variety of wildlife species.  Several of the species are vulernable to endangered.