Vodlozersky National Park is located in the far northwestern region of Russia not far from the border of Finland.  The park covers an area of 1,650 square miles (4,280 sq km), creating the 9th largest national park in the country with Beringia National Park being the largest.

The two regions are quite different.  The northern area around the lake experiences colder temperatures and a landscape of rolling hills.  The southern ecosystem is flatter with milder temperatures.

Lake Vodlozero is the largest of several lakes across the protected area, and it serves as the namesake of the national park.  The lakes are spread out across both regions of the park.  Along with the lakes, another 40% of the park area is comprised of swampland.

Almost the entire park is blanketed with forests.  The majority of wooded areas are comprised of spruce trees, followed by pine accounting for about 95% of the forest.  Birch and aspen each make up a small percentage of the remaining tree species.

Hiking, rafting, and birdwatching are the primary ways to engage the national park’s wilderness.  It is important to note that all visitors are required to secure a permit from the visitor center located in the village of Kuganavolok, which is the only village within the park. 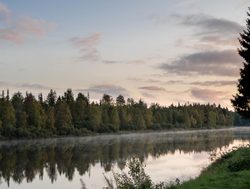 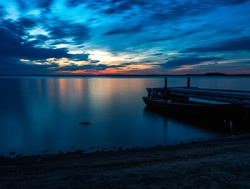 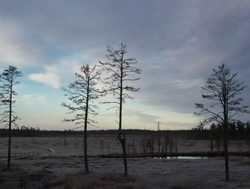 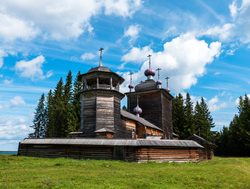 White water rafting is one of the more exciting activities while the majority of people ascribe the highlight as the pristine wilderness available for exploring on foot.  There are many lakes across the entire park offering water-based activities such as fishing and canoeing.

Lake Vodlozero is the largest lake in the park and where the name of the national park is derived from.  This freshwater lake covers an area of 124.33square miles (322 sq km).

The lake measures 22.37 miles (36 km) long and 9.95 miles (16 km) wide and features over 190 islands.  The lake will freeze during the winter months before giving way to fishing over the summer months.

The Ileksa River feeds the lake, and it flows out into the Vodla River.

The Ileksa River is the primary tributary feeding Lake Vodlozero.  The river stretches 96 miles (155 km) long-serving as a source of water into Lake Onega and the Baltic Sea.

The Ilyinsky Pogost Wooden Church is located on one of the islands on Lake Vodlozero.  It is a cultural and historical monument that many people ascribe as the historical highlight of the park.  It is an iconic structure that is incredibly photogenic.

Hiking is one of the typical activities of the park and the best way to experience the astounding forested area.

This is a 24.85-mile (40 km) trail that meanders from the village of Varishpelda to the town of Luza while following the Ileksa River.

The national park was established to serve as a protected area for the pristine wilderness along with the cultural heritage found in the park.  In addition to this protection, the park was protected to create an atmosphere for scientific research that supports ecological education.

The park was also created as a natural environment that afforded responsible tourism and eco-friendly hiking and exploration.  The park provides ecological camps and programs to further environmental education efforts.