Waterberg Plateau National Park is located in the central park of Namibia on the eastern side of the central highlands.  The park covers an area of 156 square miles (405 sq km).

The heart of the national park is the extensive table mountain that towers over the plateau.  The plateau rests high above the Kalahari plains of eastern Namibia.  It appears as if the plateau is endless stretching a distance of 31 miles (50 km) long and 9.94 miles (16 km) wide. Some believe it is more impressive than the renowned Table Mountain in South Africa.

The plateau reaches heights up to 656 feet (200 m).  The Waterberg wilderness is a green oasis in the Kalahari region.  The wooded and diverse vegetation and remoteness of the park make this a wildlife haven. Acacia bushes, evergreen trees, broad-leafed wooded areas, and grasslands create an ecosystem that enables a series of threatened species to survive and even thrive.

Some of the most popular species include the black rhinoceros, white rhinoceros, giraffe, oryx, kudu, roan antelope, sable antelope, and a series of other smaller antelope.  Some of the predator species include leopard, hyena, cheetah, and wild dog.  Cape vultures and Verreaux’s Eagles are two of the highlights from the over 200 species of birds found nesting or migrating through the park’s borders.

It is quite challenging to reach the plateau, which has made the area an excellent place to protect wildlife species from poachers.  The park is known for hiking treks and wildlife game drives to see the rhinos. 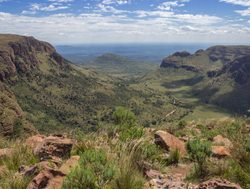 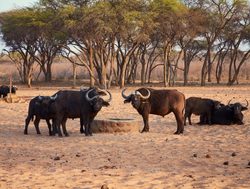 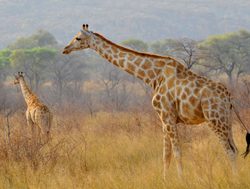 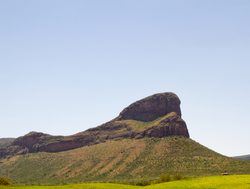 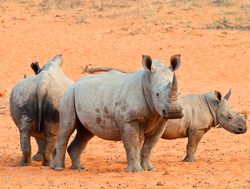 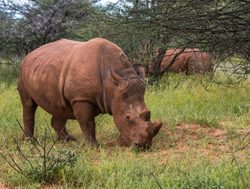 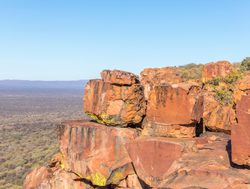 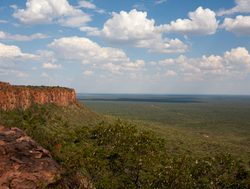 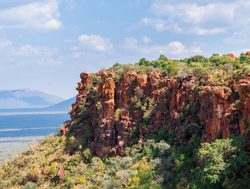 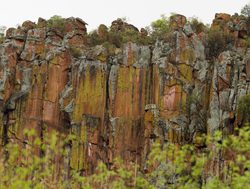 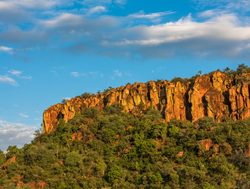 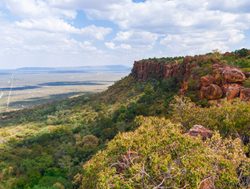 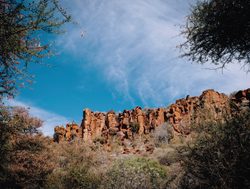 The southwestern black rhinoceros of Namibia is a subspecies of the black rhinoceros.  The species is rated as near threatened by the IUCN with poaching serving as the primary threat to survival.

This subspecies displays the traditional prehensile lip.  It has adapted well to the arid conditions of the plateau and surrounding savanna and desert climates.  The adults reach heights up to 71 inches (180 cm) and lengths up to 12.3 feet (3.75 m).  They can weigh as much as 6,385 pounds (2,896 kg).  The females are usually a little smaller than the males.

The national park provides guided rhino tracking tours.  This is a hiking endeavor that allows visitors to track rhinoceroses on foot.  This is a great way to engage in exercise and one of the most fascinating creatures in the world.

This is a trek up and along table mountain.  It delivers striking panoramic views of the surrounding wilderness.

This is a loop trail that ascends 1,036 feet (315 m) while meandering 6.5 miles (10.5 km) through the landscape and vegetation with chances to see wildlife.

This is a three-day guided adventure traveling over (42 km) across the plateau.  The park warden leads the primitive trek with backpacking everything you take.

This is a (50 km) multi-day trek that travels the Mountain View Trail along the plateau and amongst the sandstone kopjes.  This is a backpacking adventure and an excellent way to experience the landscapes, wilderness, and wildlife of the park.

Waterberg Plateau National Park was created to protect rare and endangered species.  The area within the park and surrounding plateau is remote and inaccessible.  This makes it much easier for the park to protect endangered wildlife.

The park and plateau region have been leveraged by the Namibian government and environmental services to breed, protect, and export rare species to support other national parks in the country.  The Black Rhinos were reintroduced in 1989, and the park has a committed effort to protect and develop the species for sharing with other Namibia parks.

Along with protecting amazing landscapes the table mountain and plateau deliver, the national park is committed to helping rare and endangered species thrive so they can help repopulate other national parks in the country.