Namib-Naukluft National Park is located on the western side of Namibia just south of the midway point.  The park lies between the shoreline of the Atlantic Ocean through to the beginning of the Great Escarpment which extends into South Africa.  It borders the neighboring Dorob National Park to the north.  The park covers an area of 19,216 square miles (49,768 sq km) creating the largest national park in Africa and the fourth largest in the world.  It is a renowned park featuring the splendor of the Namib Desert.

The Namib Desert is at the heart of the national park.  As the oldest desert in the world, it displays brilliantly colored sand dunes that are considered some of the largest in the world. The landscapes include remarkable mountains, naturally carved canyons, tremendous gravel plains, and towering and captivating sand dunes.

Many of the dunes serve as landmarks as well as individual attractions.  Here are some of the most popular dunes:

Salt and clay pans are iconic attractions in the national park.  Sossusvlei, Hiddenvlei, and Deadvlei are three of the most visited pans.  Sossusvlei is the most renowned, however, all three are known to home to wildlife that is attracted to the salt.

The dunes are some of the most popular features of the national park.  The park administration has developed asphalt roads that make it easy to see many of the more famous dunes and surrounding landscape.

One of the best ways to truly appreciated the majestic nature of the dunes is from above.  Taking a scenic flight or balloon ride over the dunes is captivating as it allows you to truly capture the astounding size of the dunes and the endless sea of rolling desert.

Along with the dunes, the park is characterized by rocky outcrops and rock formations that are locally known as kopjes and inselbergs.  These rock formations are usually comprised of granite, feldspar, and sandstone.

As the desert moves closer to the shoreline, the terrain is characterized by lagoons, mudflats, and wetlands.  This terrain and vegetation attract hundreds of thousands of birds creating a birdwatcher’s haven. 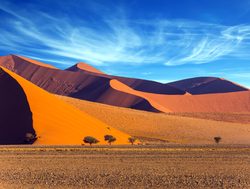 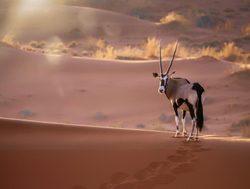 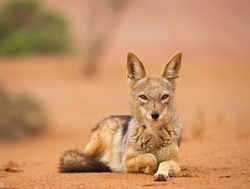 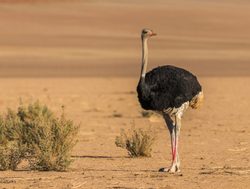 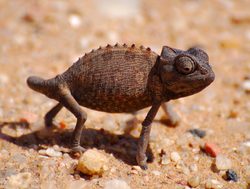 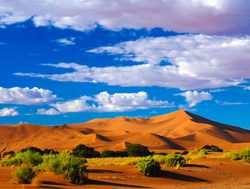 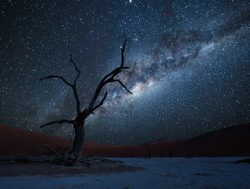 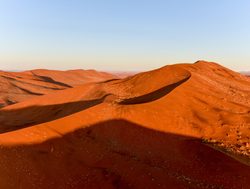 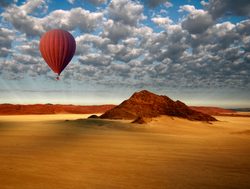 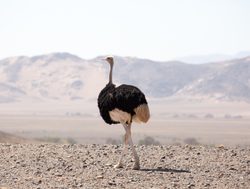 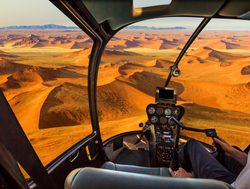 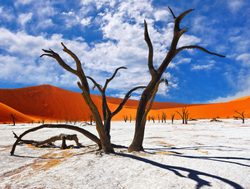 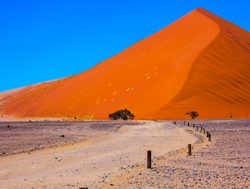 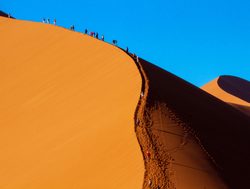 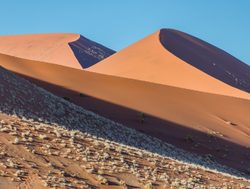 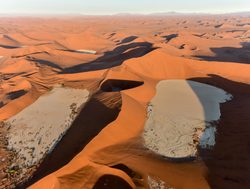 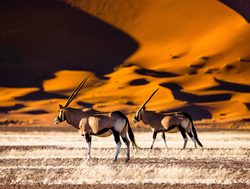 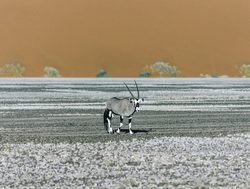 For visitors to Namib-Naukluft who like statistical significance, they can proclaim that they have visited the largest national park on the continent of Africa.  They can also declare that they have seen the oldest desert in the world. 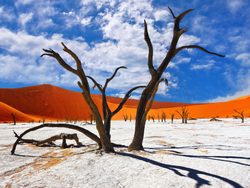 Sossusvlei is a salt and clay pan nestled in a sea of towering red sand dunes. The pan is located in the southern region of the Namib Desert serving as one of the favorite attractions of travelers exploring the national park.

The name is derived for the Afrikaans words that translate, “marsh, no return, and a dead end.”  One might say it is a dead-end marsh of no return.  The pan is actually a drainage basin for the Tsauchab River which gives it seasonal life.

The Sossusvlei pan features abundant wildlife which includes jackal, oryx, kudu, springbok, ostrich, and a number of reptiles and arthropods.  Several of the species are endemic and have adapted to the climate quite well. 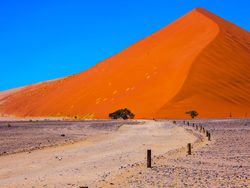 The Namib Desert is a highlight all on its own.  The desert is recognized as the oldest desert in the world.  It is characterized by massive sand dunes ranging in different shades of red and orange.

The Namib Desert extends far beyond the borders of the national park covering most of Namibia and continuing into Angola in the north and South Africa in the south.  It measures over 1,200 miles (2,000 km) in length running north to south.

One portion of the canyon features water usually year-round; however, the rest is usually dry except during the rainy season.  The portion that contains water attracts wildlife, which makes it a good place to see animals.

This is one of the most unique places in the world.  Hiking amongst the dunes is one one of the commonly ways used to explore the park.  There are ways you can discover all that Namib-Naukluft has to offer. 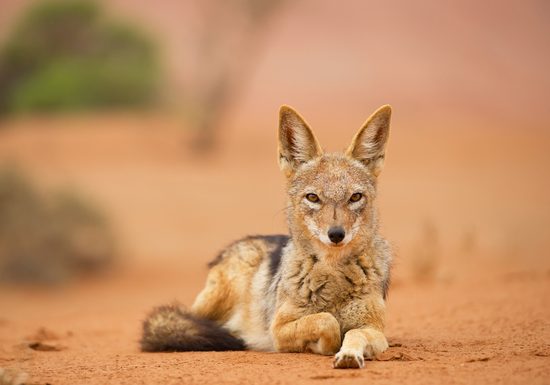 The most common activity is a safari game drive.  Board the 4x4 safari vehicle and explore the landscapes and wildlife that make this natural wonder such a special place. 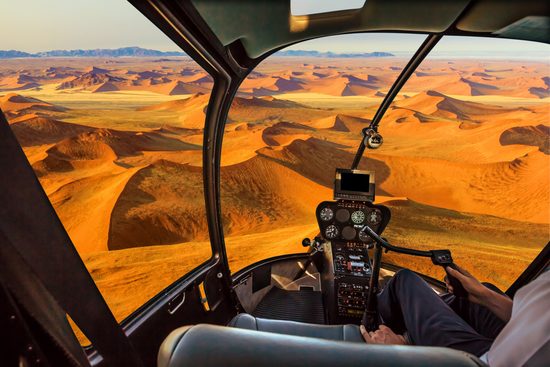 Namib-Naukluft National Park is Africa’s largest game park.  Most of the park is enjoyed while on a safari game drive or up in the air in a balloon or scenic flight.  There are opportunities to engage the wilderness on foot.  Many of the walkabouts are around iconic landmarks.

This is a hike up to the top of the famous Dune 45 with an elevation gain of 357 feet (108.8 m).  The trek covers a distance of 1.1 miles (1.77 km) before returning back down the same path.  The trail is sandy and rated moderate as you ascend the dune.  There is no shade so make sure you wear sunscreen, a hot, and take water.

This is a short trail that takes you into the canyon with chances to see the different sedimentary layers as well as the steep and rocky canyon walls.  There are also pools where you can take a refreshing dip.

This is a scenic loop hike meandering 10.56 miles (17 km) along a small creek through the Naukluft mountains.  This is a beautiful trek into the mountains which delivers a number of picturesque views of the mountain landscape.  The trail even providers hikers with a chance to cool off in natural swimming holes of the creek.

This is an adventurous hike up into the Naukluft Mountains.  The trail ascends over 6.21 miles (10 km) while providing picturesque panoramic views below.  The trail is rated moderate to difficult and requires good physical fitness.  Crossing the pools on the chains requires visitors to be free from fear of heights.

Namib-Naukluft National Park was created to protect the salt and clay pans, the world’s oldest desert, and the wildlife that lives amongst this astounding area.  This is part of a series of parks, such as Skeleton Coast National Park, that protects the entire coastline of Namibia.

There are several species that are endemic to the area that have adapted to the unique ecosystem.  The national park also protects some of the largest sand dunes in the world.