Souss-Massa National Park is located along the coast in the southwestern part of Morocco.  The park covers an area of 131 square miles (338 sq km).

The Oued Souss and Oued Massa estuaries are located at opposite ends of the park. Together they serve as the source for the name of the national park.  Oued Souss is located on the northern side of the park boundaries.

Along with these two vital water sources, the park is comprised of grassland steppes, sand dunes, sandy beaches, and wetlands. The southern side of the park appears to be the preferred habitat of the endemic northern bald ibis.

These same grasslands, wetlands, estuaries, and grassy dunes create a renowned habitat for a significant variety of nesting and migrating birds in the park. In addition to the array of bird species, the park is also home to a variety of other wildlife.

Some of the popular wildlife include African wild cat, red fox, hedgehog, leopard lizard, and weasel. 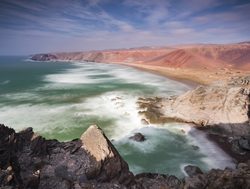 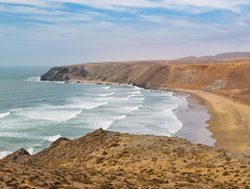 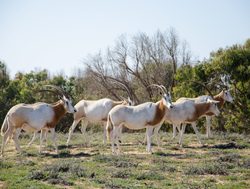 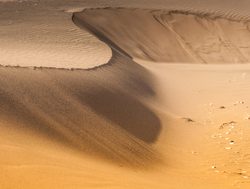 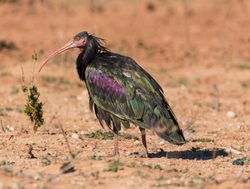 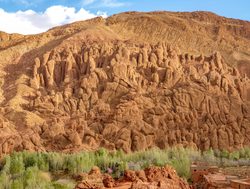 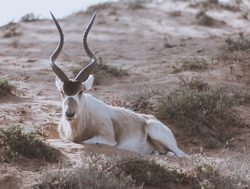 The national park was established to protect the habitat of the Northern Bald Ibis as well as the other wildlife species that call the wetlands and steppe grasslands home.

The northern bald ibis is also known as hermit ibis and the waldrapp. The species differs from other ibis species in that it is not a wading species.  Where most ibises are found wading in the water and searching for water fish, frogs, and insects, this ibis scours the rugged landscape for lizards, insects, and other potential prey.

The northern bald ibis stands around 30 inches (76.2 cm) and displays a black-feathered body.  The face is red and has no feathers. The national park and a neighboring protected area in Morocco account for 95% of the population.

The addax, dama gazelle, Dorcas gazelle, and the scimitar oryx are four ungulate species that are threatened species that are getting special attention by the park.  Having a chance to see these creatures is a rare experience.

There are a good handful of trails that traverse the dunes, steppes, and grasslands of the national park. Several ascend into the higher elevations of the area.

This trail is rated moderate with an elevation gain of 3,484 feet (1,061.9 m) over a distance of 4.36 miles (7.02 km).  The trail provides views along the way with panoramic views of the surrounding area. Rocky landscapes are one of the highlights of the trail.

This is a moderate-rated loop trail that covers a distance of 7.95 miles (77.17 km) while delivering an elevation gain of 3, 573 feet (1,089 m). The primary purpose of the hike is the rugged landscapes and the panoramic views from the ascent.

This is a loop trail with a moderate rating that ascends 925 feet (281.9 m) over a distance of 8.73 miles (14.04 km). Rock formations and the multi-colored boulder field are the highlights of this endeavor.  The rugged landscape is rather striking.

This is an out and back trail ascending 2,733 feet (833 m) while crossing over 6.25 miles (10.06 km) of the rugged terrain.  Capturing views of the rocky landscapes and the panoramic view is the splendor of this adventure.

Souss-Massa and the neighboring Tamri are home to four colonies of the endangered ibis.  This makes up about 95% of the total population of the species.

The park also is committed to repopulating the area with the North African ostrich as well as breeding to increase the population of addax, dama and Dorcas gazelle, and the oryx.  The biggest threat to the ibis and other species is encroaching human development.