Connemara National Park is located on the western side of Ireland near the midpoint of the island. The park only covers an area of 7.7 square miles (20 sq km) creating one of the smaller national parks from around the world, but only the second smallest in Ireland after The Burren National Park.

The small area is quite diverse from an ecological perspective displaying varied facets of nature.  The park is comprised of bogs, forests, grasslands, heaths, and mountains. The most prevalent vegetation across the park is the blanket mire and the heathland.

Of this vegetation, the purple moor grass is the most commonly experienced, and when in bloom the purple flowers create some of the most astounding picturesque landscapes across the rolling hills.  It is easy to ascribe these captivating purple fields as majestic blankets laid down by the heavens.

Although they are limited and challenging to see rabbits, foxes, wild goats, and shrews are present in the park.  The park is more known for its diversity of bird species including those that nest and migrate through the area.

Some of the predator species include kestrel, Eurasian sparrow hawk, merlin, and the peregrine falcon which is the world’s fastest animal.  Some of the songbirds include skylark, European stonechat, European robin, and Eurasian wren.

Much of the terrain and landscape was part of the Kylemore estate which adds an element of history and culture to the national park experience.  The most significant part of the grounds is the Kylemore Abbey. 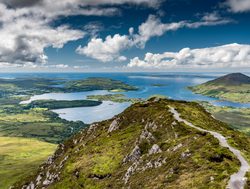 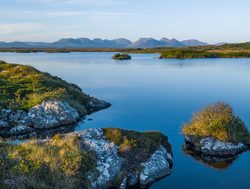 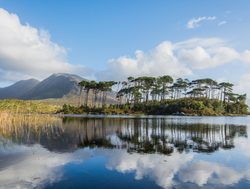 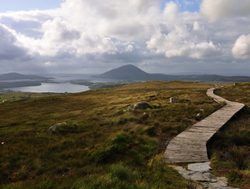 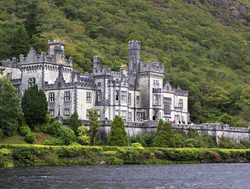 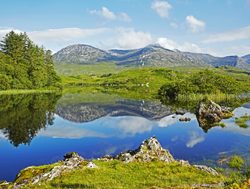 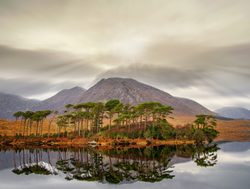 The purple moor grass blanketed fields are easily recognized as a highlight by people who witness their color in full.  These fields and rolling hills engulfed in purple majesty is inspiring to say the least.

The Twelve Bens, also called Twelve Bins, is a mountain range situated in Connemara that is characterized by jagged peaks and quartzite summits. Benbaun is the tallest point in the range reaching a summit of 2,392 feet (729 m).  It is also the highest point in the park.

The massif that makes up the Twelve Bens features 22 separate peaks that reach over 328 feet (100 m) with the highest focal point being Benbaun. 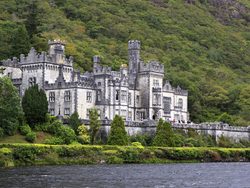 The Kylemore Castle was constructed in 1868 serving as the home for the Mitchell Henry family. It would later be bought and set aside as the Kylemore Abbey to support Benedictine Nuns who escaped out of Belgium during World War I.

The castle encompassed an area of around 40,000 square feet (3,700 sq m).  It included 33 bedrooms but only 4 bathrooms.  Additionally, there was a ballroom, billiard room, library, 4 sitting rooms, and several specialty rooms.

The Abbey now serves as an educational venue with collaboration occurring between the residential nuns and the University of Notre Dame.

There are a good handful of trails that traverse through and around the national park.  Most of the trails are focused on ascending the hills to provide more panoramic views of the landscape. There are both easy and moderate rated trails.

This loop trail travels 1.6 miles (2.57 km) around the base of the foothills offering chances to see wildlife and wildflowers.  It is an easy rated hike that is family-friendly.

This trail is rated moderate and features an ascent of 1,266 feet (385.88 m) while traveling the 3.8-mile (6.11 km) loop.  The terrain is a bit rocky, but it provides nice views of the surrounding landscape with chances to see wildflowers and wildlife.

This double loop trail covers a distance of 4.5 miles (7.24 km) while ascending 1,312 feet (399.90 m).  The trail provides astounding panoramic views of the landscape below.  The trail is rated moderate and providers hikers with opportunities to see wildlife while taking in the scenic views.

This is another loop trail that is rated moderate.  It features an elevation gain of 2,201 feet (760.86 m) while circling around a 5.4 mile (8.69 km) loop in the Twelve Bends.  It provides excellent panoramic views of the lake and terrain below.

This trail is an exciting ridge-walk trail across parts of the Twelve Bens mountain range.  The journey covers a distance of 9.94 miles (16 km) while traversing across the ridge of the mountains.  The ascent and hike take about 9 hours to complete.

The national park was created to protect both the exquisite landscapes as well as the historical facets of the Kylemore Abbey and estate. Red deer once roamed the area but were later eradicated.

The national park is seeking to re-establish a presence with the red deer.  A herd has been established and efforts are being made to support and encourage population growth.