Khangchendzonga National Park is located in the eastern finger of India in the state of Sikkim. It sits adjacent to the Nepal-India border. The park covers an area of 328 square miles (849.5 sq km).

Kangchenjunga has the neighboring Neora Valley National Park and is part of 14 different protected areas spread across the larger region of Bhutan, China, India, and Nepal.

The mountainous national park elevations range from 6,001 feet (1,820 m) up to 28,050 feet (8,550 m), which is accounted for by Mount Kanchenjunga.  It is the third tallest mountain in the world, with Mount Everest in Sagarmatha National Park.

The comprises striking mountain landscapes, river and streams, steep-sided valleys, lakes, and glaciers. The habitats vary from subtropical to alpine, creating a diverse biological region.  The varied habitats give way to a variety of wildlife species.  There are almost 425 different medicinal species of vegetation.

Almost half of all bird species found throughout India may be witnessed in the national park borders. Of the over three birds species, three of them are endemic to this region of the Himalayas.  A variety of falcons and hawks are often hopeful bird sightings by the bird lovers who embark on journeys into the park. 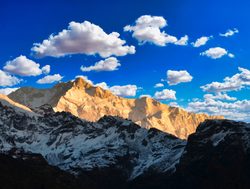 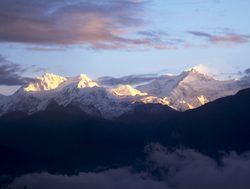 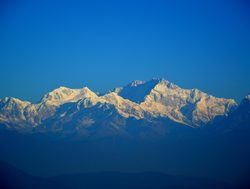 The primary reason visitors head to the national park is to hike and take the trek out to view the world’s third tallest mountain.  Views from the lookouts provide striking landscapes that complement the remarkable Kanchenjunga is the highlight for most visitors.

Kanchenjunga is the pinnacle mountain attraction in the national park and the namesake of the park.  It features a summit of 28,169 feet (8,586 m), making it the third tallest summit in the world.

Kanchenjunga is part of the Himalayas that sits along the eastern border of Nepal and India.  It was originally believed to be the tallest mountain globally until official surveying concluded that Mount Everest was actually the tallest.

Tholung Monastery is a Buddhist ecclesiastical fortification known as a Gompa.  It is situated in the isolated area of Dzongu.  It was built during the 18th century and now houses treasured manuscripts and artifacts from other Gompas.  It serves as one of the foundational reasons the park received UNESCO World Heritage Status.

The national park is a renowned trekking destination; however, there is not really an abundance of trails.  There is really only one or two routes and what is experienced depends on how many days you venture into the park for all practical purposes.

This is a multiday journey that begins at the northern village of Lachen.  The journey is 5 to 7 days trekking up and through the mountains of the national park.  The highlight is the lookout points of Kanchenjunga mountain.

This trek initiates from the village of Linza in northern Sikkim.  This is another 5 to 7-day option with a chance to see the Tholung Monastery, which has historical significance to the region.  This also provides views of Kanchenjunga mountain as well as the surrounding landscape.

For those who do not want to spend the whole week trekking, there is a shorter 3 to 4-day trek out to Dzongri.

Khangchendzonga National Park was created to protect the biosphere in Sikkim, India.  It is also a UNESCO World Heritage Site as a Mixed Heritage location.

The national park also protects part of the Himalayan mountain range and the world’s third-highest summit. With over 300 species and 3 endemic species of birds, the national park is recognized as an Important Bird Area.

The diverse ecosystem must also be protected from human encroachment so that the abundant wildlife species can continue to survive.