Vikos Aoos National Park is located in the northwestern corner of Greece.  The park covers an area of 49 square miles (126.91 sq km).

The park is named after the two gorges found within the borders of the park.  The gorges are named Vikos Gorge and Aoos Gorge.  Along with the two gorges the park is comprised of mountains, rivers, lakes, caves, and deep canyons.

Many of these landscapes are blanketed with thick coniferous and deciduous woodlands.  The elevations of the park vary from 1,804 to 8,192 feet (550 to 2,497 m). The highest point occurs at Mount Tymfi.

These varying elevations and vegetation areas have established three habitat regions that support the diverse wildlife of the area.  Part of the vegetation zones include grasslands, shrublands, and varied woodlands further supporting the animal species of the park.

Some of the more popular species include roe deer, brown bear, chamois, fox, wolf, otter, lynx, and wild cat.  There are over 120 species of birds with at least 15 raptor species highlighting the potential sightings. 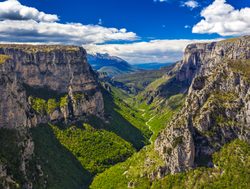 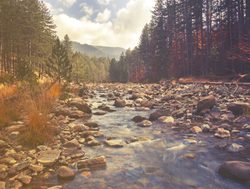 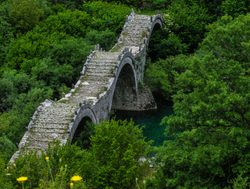 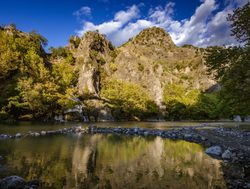 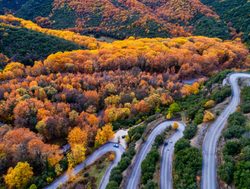 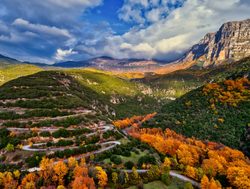 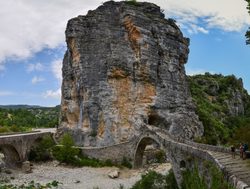 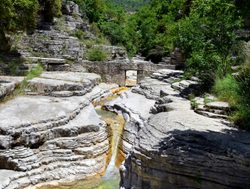 The natural facets of the park create a tremendous place for hiking, kayaking, mountain biking, and rafting.  Many people say the highlight is engaging this astounding landscape through one of these activities.  The two gorges are often considered the pinnacle attractions.

Vikos Gorge is located along the southern slopes of Mount Tymfi of the Pindus Mountains.  The gorge covers a distance of 12.43 miles (20 km) while reaching a maximum width of 1,312.3 feet (400 m).

There is a viewing platform at Oxia which allows visitors to look out over the deepest part of the gorge.

The Aoos Gorge extends a distance of 6 miles (10 km).  The gorge is carved by the Aoos River and travels between Mount Tymphe, Mount Trapezitsa, and Mount Raidovouni.  The natural landscape is adorned with monasteries as well as single-arched bridges that were constructed during the 17th through the 19th century.

Visitors get a taste of history and culture while exploring the gorge.

Mount Tymfi is also known as Tymphe, Timfi, and Tymphi. This massif features its highest point at Gamila.  The peak is 8,192 feet (2,497 m) high.  The mountain features a long plateau that some say resembles Table Mountain in South Africa.

Hiking around the exquisite landscapes sits atop the interest of the majority of travelers who visit the national park.  There are several trails ranging from easy to difficult and short to longer adventures.

This is rated easy with an elevation gain of only 521 feet (158.8 m) while traveling 5.9 miles (9.49 km) before returning.  The trail meanders through the forest and along a river providing great woodland landscapes.

This is a short 0.4-mile (0.64 km) trail that travels through the forest out to an incredible panoramic view of the cliffs and valley below.  It is rated easy and the view is astounding.

This trail covers a distance of 7.3 miles (11.7 km) while ascending 2,024 feet (616.92 m) before returning back down.  The trail travels through the famous gorge and accompanying forest.  There is a chance to see wildlife while witnessing the different highlights of the gorge.

This is an out and back trail that descends 1,046 feet (318.8 m) over 3.1 miles (4.99 km) to the bottom of the gorge. While views of the gorge are highlights there are also chances to see wildlife while trekking through the forest.

This is a second opportunity to hike the renowned gorge.  This trail is rated difficult while ascending 3,182 feet (969.87 m) over a distance of 7.1 miles (11.4 km). Camping and backpacking are popular activities of this trail which also gives you a chance to see wildlife while exploring the gorge.  The views are astounding.

The national park was created to protect the terrain and landscape that surrounds these two stunning gorges.  The park protects one of the most diverse woodland ecosystems in Greece with wildlife treasures like wolves, foxes, wild horses, and roe deer.