Samaria National Park is located on the southern side of Crete along the central part of the island. The Greek park encompasses the Samaria Gorge accounting for an area of approximately 28.9 square miles (75 sq km) creating the only national park on the island.

The Samaria Gorge is the focal point of the national park.  The gorge stretches across a distance of 9.9 miles (16 km) while the entrance to the park adds another 1.24 miles (2 km).  It is recognized as the longest gorge in Europe.

The gorge is nestled between the Lefka Oril of the White Mountains and Mount Volakias.  A river runs from the upper mountains through the gorge headed south toward the mouth of the river in the Mediterranean Sea.

The rugged rocky gorge and surrounding White Mountains are home to 16 endemic species.  The kri-kri is probably the most renowned and the species most people hope to witness.

Hiking the gorge is really the only activity associated with the national park.  Camping, swimming, or staying overnight are all prohibited.  The expectation is that you will hike to see the gorge and then exit. 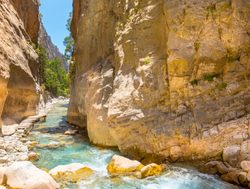 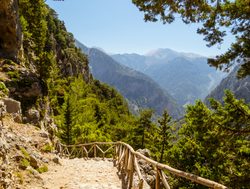 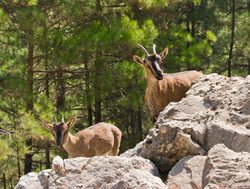 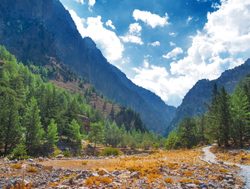 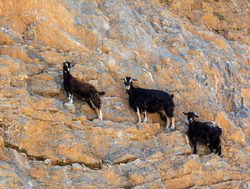 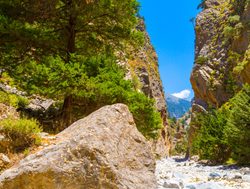 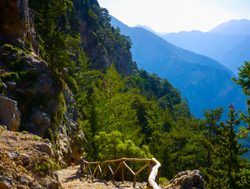 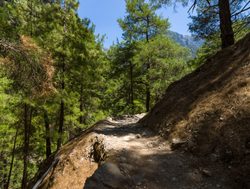 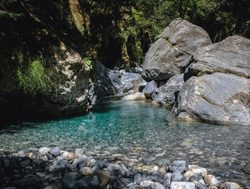 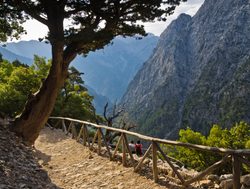 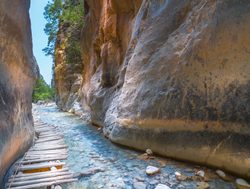 The Samaria Gorge is the highlight of the national park.  It is the natural attraction that has been set aside in the protected area.  Travelers visiting the national park are there to see and explore the gorge.

The Gates, which are also known as Iron Gates, is the most intriguing part of the gorge.  At this juncture of the gorge, the sides of the canyon walls narrow to a width of only 13.1 feet (4 m).

At this same point, the walls of the gorge stretch 980 feet (300 m) toward the sky creating one of the most ominous views within the gorge.

The national park is home to the endangered kri-kri.  It is also known as the Cretan Ibex, the Gretan goat, and the Agrimi.  Originally endemic to the eastern Mediterranean, it may now only be seen with the national park and surrounding area.  There are three smaller islands off the coast of Crete which also have a small number of the kri-kri.

It is renowned for its habitation of the near-vertical cliffs of the gorge as well as the rugged White Mountains.  The body is covered in light brownish fur while getting darker around the neck.  It features two horns that sweep back toward the tail.

The trail covers a distance of 9.32 miles (15 km) with 8.08 miles (13 km) of that accounted for by the actual gorge.  The remaining distance is to reach the entrance of the park.  The trail is rather strenuous traveling from the Omalos Plateau to Agia Roumeli taking around six hours to complete give or take an hour.

This is a trail that begins in the national park before crossing the park borders and ending at Chora Sfakion. This trail is rated moderate however it is challenging covering a distance of 10.7 miles (17.22 km) and an ascent of 2,335 feet (711.71 m).  It provides views of the beach, a cave, and the blue sea.

This is a challenging endeavor that ascends 3,172 feet (966.83 m) while traveling over a distance of 6.2 miles (9.98 km) before returning back down.  The panoramic views and the accomplishing of the endeavor are the rewards of this hike.

The national park was created to protect the Samaria Gorge and terrain that is home to the endangered kri-kri and 15 other endemic species of wildlife and another 55 species of endemic vegetation.  It is a small park and the focus is directed at the immediate area associated with the gorge.

The park service is committed to the protection of the endangered species prohibiting swimming, camping, or any other overnight activity