Mole National Park is located in the northwestern region of Ghana. The park covers an area of 1,868.7 square miles (4,840 sq km) creating the largest protected wildlife area in Ghana.

The park has increased in popularity with some of Ghana’s improvements and it competes with Kakum National Park which is located in the southern part of the country as the country’s most popular protected area.

The savannah landscape across the national park is comprised of both savanna and riparian habitats.  The elevation is slightly rolling hills but overall flat at an elevation around 492 feet (150 m) above sea level.

There are two key rivers flowing through the park known as the Lovi River and the Mole River.  However, they do tend to dry up during the dry season leaving only small pools of water in various depressions of the riverbed.

The savanna grasslands feature wild syringa, African baobab, and a number of different flowering trees that create shade and escape amongst the grasslands.  Collectively, they work together to create a good habitat for the array of wildlife calling the national park home.

There are nearly 100 mammalian species living amongst the borders of Mole National Park.  Lions, leopards, and hyenas are some of the predator species that visitors can hope to see.  Other popular wildlife sightings include buffalo, bushbuck, crocodile, duiker, elephant, hartebeest, hippopotamus, oribi, roan, warthog, and the waterbuck.

Some of the primates include baboon, colobus monkey, green vervet monkey, and the patas monkey.  The martial eagle and Bateleur eagle are two of the highlights from the 344 different species of birds that nest or migrate through the park. 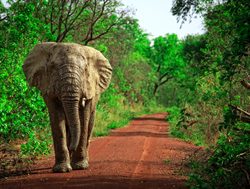 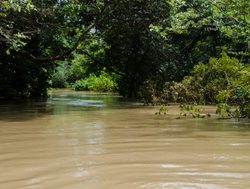 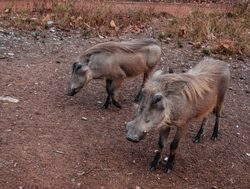 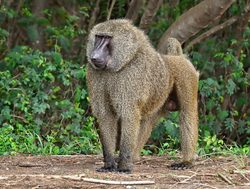 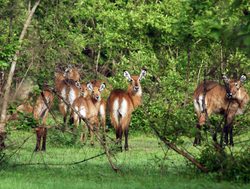 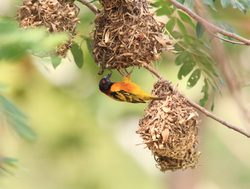 The majority of people visiting the park find the array of wildlife as the highlight.  With almost 100 different mammalian species and nearly 350 species of birds, it is a great place to see and experience diverse animal life.

There is no pinnacle attraction in Mole National Park, it is more about the eclectic experience.  Mole was the first and the largest national park in Ghana.  It is also argued as the most prestigious.  It is home to a population of elephants that have the greatest chance to survive compared to anywhere else in the country.

You are invited to get out and explore the national park and see the wildlife that calls this region home.  There are a couple of ways for you to see animals.

Get in a 4x4 safari vehicle and come explore the wilderness and the wildlife.  This is your best chance for see a vareity of animals.

A walking safari is most often a 2 to 4-hour adventure starting early in the morning or later in the afternoon.  Although there are fewer predators in the park, an armed ranger is part of the guided safari endeavor.

Mole National Park is a wildlife reserve and not traditionally seen as a place to hike.  The majority of activities are through safari.  The good news is, the national park does provide opportunities for walking safaris which gives you a chance to explore on foot while trying to witness the splendor of the wildlife the park offers.

The park was established to protect the diversity of wildlife that lives in the savanna ecosystem.  The primary threat to the survival of the varied species is poaching and human encroachment.  The park has historically been underfunded, but the Ghana government is committed to protecting the natural resources of the national park.

The boundaries for human habitation have been pushed further away from the park.  This has seemed to lessen the amount of poaching which typically came from local residents who now find it too far to travel combined with the other risks.  Elephant protection is one of the primary focuses of the park's conservation efforts.