The White Desert is part of the Farafra depression in the Sahara Desert.  It also features the Farafra Oasis, the Ain El Maqfi Oasis, and the Ain El Wadi Oasis. The park is renowned for the white sands, white sand rock formations, and the introduction to the Great Sand Sea.

The larger Farafra depression covers an area of 380 square miles (980 sq km) creating the second-largest depression in Egypt.  However, it features the lowest number of inhabitants.

The white sands manifest as piles and rows of white piles scattered across orange sandy base landscapes, as rock spires, and as other unusual white rock formations. The white sand and white rocks are comprised of either white calcium, quartz crystals, or limestone.

In many places, the collection of white sand appears like snow that has frosted the desert.  These white quartz crystals have created several unique picturesque rock shapes.  The pinnacle white rock formation is known as Crystal Mountain.  It is completely made out of crystal and features a hole through the middle of it.

The elevation of the park varies from 104.99 feet (32 m) to 1,158.14 feet (353 m) above sea level.  The tallest point occurs at El Qess Abu Said. Some of the landscapes feature protruding orange-colored rock formations with white desert facets surrounding the base of each of these rugged rock features.

Along with protecting the unique white sands and rock formations of the Sahara Desert, the park also protects an array of wildlife.  Some of the more popular species include barbary sheep, fennec fox, Dorcas gazelle, jackal, red fox, Rhmim gazelle, Ruppell’s fox, and Sand cats. 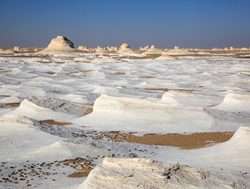 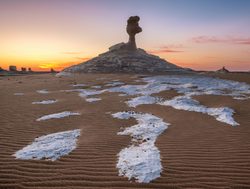 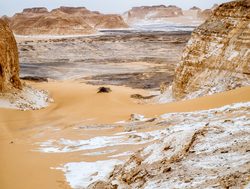 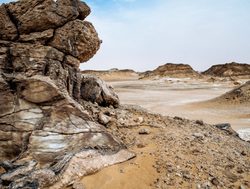 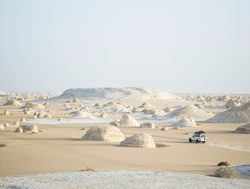 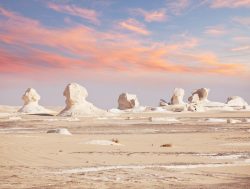 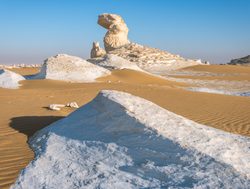 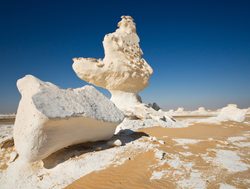 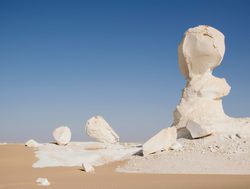 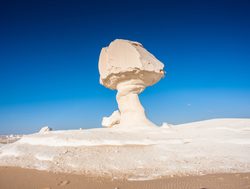 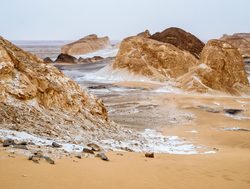 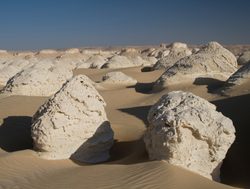 The majority of people who visit the national park are taken back by the white sands and the white sand rock formations which are unique compared to the more traditional shades of red and orange sands blanketed across the rest of the Sahara Desert.

Crystal Mountain is also called Crystal Rock.  This is the most iconic rock formation in the national park.  Although not as tall or big as Delicate Arch in Arches National Park, it gives you a similar type of sensation.

The good news is that this featured attraction is easily accessible right off the side of the main road.  It is about 15 miles (24 km) north of Naqb As Sillim.

The Great Sand Sea is a portion of the Sahara Desert that lies between Egypt and Libya.  This portion of the desert covers an area of 27,799.36 square miles (72,000 sq km). It is renowned for the abundant rolling sea of sand dunes that cover approximately three-quarters of the area.

The Great Sand Sea extends well beyond the national park boundaries which only serve as an introduction into this magnificent presentation of nature.  However, there are opportunities to discover and explore the White Desert as part of an explorative adventure that travels deeper into the Great Sand Sea providing a more thorough discovery of the splendor of the Sarah Desert.

The majority of people drive through the park and get out to hike around some of the featured rock formations.  There have been opportunities to hike and camp through the park, but that has been limited by the government.  Some say the authorities turn their eyes away to allow the tourist dollars, however, this would be at your own risk and not a recommendation.

This is an easy hike that takes visitors out to one of the white rock formations that display like a chicken sitting underneath a giant mushroom.

This is a short moderate hike to the top of English Mountain.  The name comes from the ruins of a British World War I outpost that sits atop.  Once you reach the ruins, you will also be provided with a panoramic view of the area.

This is a 12-day excursion that travels through the White Desert, Black Desert, and Crystal Mountain.  This is an adventure that will allow you to experience many different facets of the world's largest desert.