Wadi el Gemal National Park is located in the southeastern part of Egypt along the coastline of the Red Sea. The total park covers an area of 2,880 square miles (7,450 sq km) creating one of Egypt’s largest wadis. Ras Muhammad National Park is a neighboring park that protects another region of the Red Sea Reef.

Some would argue that although the aquatic portion of the park is smaller, it protects a greater amount of diversity and uniqueness. There are over 450 species of coral and over 1,200 species of fish protected in the Red Sea portion of the national park.

The land part of the park adds historical and cultural significance to the natural wonders that are part of the habitat and ecosystem of the coastline. The UNESCO World Heritage Site highlights the prehistoric rock art, the Ptolemaic ruins, and the ruins from the Roman empire.  Ancient Egypt is found throughout the park in different ways.

The land also includes five separate islands that serve the marine-oriented ecosystem as breeding grounds. One of the islands is Wadi El Gamal Island as the namesake of the park.  Thirteen species of birds use these islands to nest.  The seagrass surrounding the islands and areas of the coral reef serves as a great habitat for the endangered dugong and the green turtle.

The coastline is also home to mangroves which add to the ecosystem that supports the dugong and bird species who take to the trees.  The primary wildlife of the area is focused on Dorca’s gazelle and the Nubian Ibex while other species include camel, hyrax, and wild donkey.  The majority of wildlife in both numbers and diversity are found in the marine ecosystems of the park.

There are a variety of ways of experiencing the natural and cultural facets of the park by jeep or four-wheel safari vehicles, camel rides, snorkeling, scuba diving, and hiking. 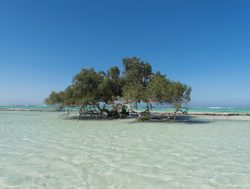 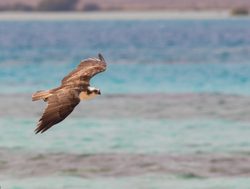 Wadi el Gemal provides visitors with a chance to experience cultural, historical, natural, and marine facets all in one visit.  The variety of the visit is what many people find as the highlight.  The Red Sea and abundant marine life is a highlight for most.

Although the Red Sea is a much larger body of water lying between Africa and Asia and between multiple countries, Egypt protects over 800 square miles (2,072 sq km) of it here through the national park.

The Red Sea is a saltwater body of water off of the Indian Ocean with a surface area of 169,100 square miles (438,000 sq km).  It is the world’s furthest northern tropical body of water. The World Wildlife Fund recognizes the area as a Global 300 ecoregion because of the wildlife diversity.

The coral reef of the Red Sea stretches along the coastline for about 1,240 miles (2,000 km).  The coral itself represents diversity but it also serves as the habitat for an abundance of aquatic wildlife.

There are over 1,200 species of fish as well as 44 species of shark.  Approximately 10% of marine life is endemic and found nowhere else in the world.

The majority of exploration in the park is done by snorkelers and divers, however, there are jeep and four-wheel vehicles. However, there is hiking in the national park giving you a chance to get more personal with the natural wonders of the park.

This is an adventure that goes beyond a hike.  It is a trek across and throughout the national park with camping along the way.  It is a guided adventure with meals and porters as part of the service.

This is a full 1-day excursion that explores some of the historical ruins and sites of the park.

This is a full-day outing that is guided every Tuesday into different regions of the park.  The trekking is rugged with inclines so make sure that you are physically fit.

This is an excursion that spends the day ascending Mount Hamata while taking in the panoramic views of the area.