Cabrits National Park is located on the eastern side of the northern tip of the island of Dominica.  It sits on a small peninsula jetting off the coastline.  The small national park encompasses an area of only 2.05 square miles (5.30 sq km).

The park was created to protect a variety of facets of nature along with an old English garrison known as Fort Shirley.  The facets of nature include coral reefs, tropical forests, and wetlands.

Cabrits developed from a volcano which is now extinct, but it grew and connected Cabrits to the larger island of Dominica forming the small peninsula. The national park actually sits between two summits of extinct volcanoes serving as backdrops to an astounding beach.

The coral reefs off the shoreline of Dominica are also exquisite and bring divers and snorkelers from across the globe who want to swim in the crystal clear blue waters and capture glimpses of the beautifully colored coral and varied fish that swim amongst the reef.  It is a tropical paradise that draws cruise lines and travelers who want to experience a remote tropical paradise.

Fort Shirley was constructed in 1765 as a military outpost to defend and protect the island of Dominica.  Although originally constructed by the British, the garrison was expanded between 1778 to 1784 during the occupation of the French.

The fort features two structures that were primarily barracks, storage, and sustaining living necessities.  These structures gave way to two fortified walls.  One side had 5 canons and the other side had 4 and 2 that were angled separately.  Each of these walls sat atop the hill overlooking the waterway below with a direct line of sight to see approaching danger.

It featured over 50 buildings and provided quarters for more than 600 men.  It was finally abandoned in 1854. The area around the fort is well forested creating a tropical paradise that engulfed the fort. 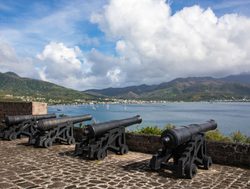 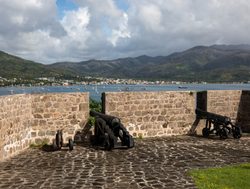 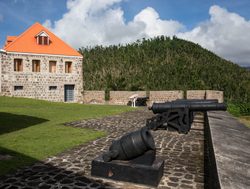 The majority of people who visit Cabrits national park do so out of interest in the Fort Shirley ruins and history that it represents. The fort is well preserved and there are tours through and about the grounds of the fort.  It is easy for people of all abilities to explore the grounds which are well maintained.  The majority of the area is wheel-chair accessible.

There are a number of trails that meander through the park providing views of the ocean, coastline, wetlands and tropical forests.  The trails are easy and short and provide access to the nature found within the national park.  There is walking or hiking around the fort, which is an easy way to engage the outdoors while also capturing a bit of history and cultural significance.

This is a 2-mile (3.22 km) round trip trail with no change in elevation.  It is an easy hike and an excellent trail through the tropical forest and views of Douglas Bay.

This is a 115-mile trail that begins in Scott’s Head village and meanders across the island with the endpoint occurring at Cabrits National Park.  It travels through much of the jungle on the island.

Cabrits National Park has a two-fold purpose.  First, it was established to protect the cultural heritage and historical significance of Forth Shirly.  Second, it protects the surrounding environment which includes coral reefs along the shoreline and forest around the fort.