Plitvice Lakes National Park, known locally as Nacionalni Park Plitvicka Jezera, is located in central Croatia near the border of Bosnia and Herzegovina. It covers an area of 114.6 square miles (296.8 sq km) making it one of the largest national parks in Croatia.  It is an Ambassador Park of the GANP.

The national park is renowned for the brilliantly colored cascading lakes featuring a variety of shades of blues, greens, and grey. There is a total of 16 different lakes all connected together with the river system that flows through the park.

The cascading lakes are created by natural dams of travertine that develop from the algae, bacteria, and moss. These travertine dams grow about .4 inch (1 cm) a year as the algae and bacteria accumulate atop the existing areas.

The lakes cascade down the mountain primarily broken into an upper group and a lower group. The majority of lakes are found in the upper region. The river and streams travel down the mountain for about 5 miles (8 km) changing elevation from 2,087 feet (636 m) down to 1,650 feet (503 m).

Most of the lakes are small and collectively cover an area of about .77 square miles (1.9 sq km). The water that leaves the lowest lake becomes the Korana River.

The park is situated between ranges creating a unique climatic area that is rich in biodiversity and unique to most of Croatia. The densely wooded area is comprised of beech, spruce, and fir followed by Alpine and Mediterranean plant life. There are over 1,265 species of plants with 75 of them endemic.

There are 55 species of flowering orchids combined with the seasonal color changes of other plant life to make each time of the year something different. Each season comes with its own blend of colors and beauty.

Popular wildlife of the area includes brown bear, wolf, lynx, and the European wildcat. There are at least 321 species of butterflies which only add to the varying colors and intrigue of the national park. 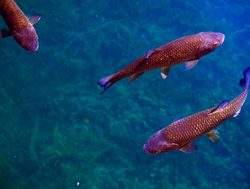 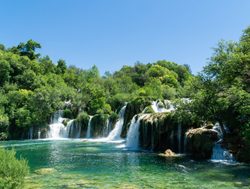 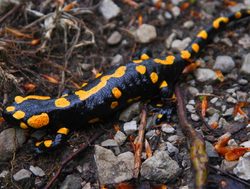 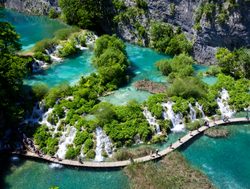 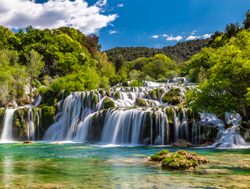 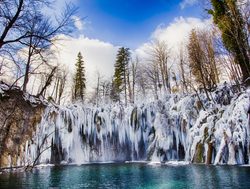 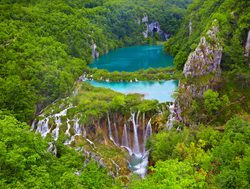 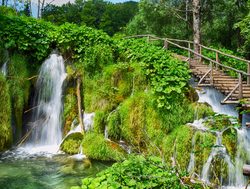 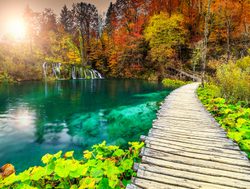 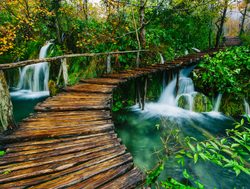 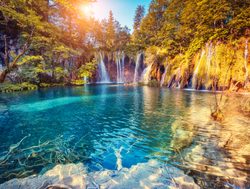 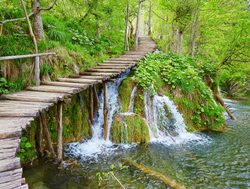 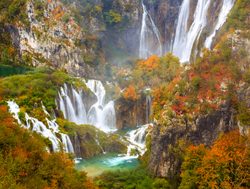 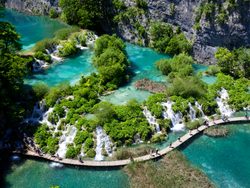 Plitvice Lakes National Park is a fairytale storybook type of place. It is renowned for the amazing colors of the various lakes that cascade down the valley. Differing shades of blue and differing shades of green combined with the waterfalls cascading over the travertine dams work together to create poetic landscapes.

It is impossible to not meander on the trails throughout the cascading lakes and falls and not stand mesmerized at the beauty. There are few places in the world where this natural phenomenon that is occurring in the Plitvice Lakes National Park exists, and it is arguable that Plitvice tops them all.

Hiking in and around the Plitvice Lakes and waterfalls is like a taste of heaven.  The serenity is pure paradise.  The majority of trails are paved or boarded and easily navigated through the park.

This is the most popular and commonly traveled trail in the park.  It is a loop trail that meanders along and between the lakes and waterfalls.  It covers a distance of 7.4 miles (11.9 km) and takes about 4 hours to complete unless you seek to move through it quickly.

This is the shortest trail at 2.1 miles (3.5 km) but it explores the lower lakes which are considered the most serene and picturesque.  Depending on your pace, it takes between two to three hours to make the loop leaving time for observing the amazing falls and stunning landscapes.  The trail goes out to the Great Waterfall and to the Kozjaka Bridge.

This 10.3-mile (16.58 km) loop travels deeper into the Plitvice Lakes area.  There are some elevation changes and the trail is rated moderate.  It takes about 5.5 hours to complete.  Stunning views of the falls and lakes are experienced along the way.