The triangle-shaped park stretches 13 miles (23 km) long with a width of 6.8 miles (11 km).  Stretching from sea level to a height of 980 feet (300 m), the island features volcanic craters, lakes, and a rugged coastline.

The park is renowned for the 887 moai statues and 300 ceremonial pltaforms found across the island.  These volcanic statues serve as historical artifacts of the megalithic culture that no longer exists.  The island was discovered by the western world in 1722 when the Dutch explorer Jacob Roggeveen first saw the island on Easter day.  He subsequently called it "Easter Island."

The island and park are mostly covered in grass with minimal trees and shrubs found on the island.  About 45 of the 150 vegetation species are endemic.    The national park is not known of for wildlife.  Some of the more popular species that are found around the island include a variety of marine turtles and two different lizards.  There are only four species of birds with one being marine and the other three being terrestrial. 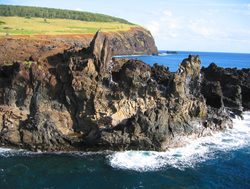 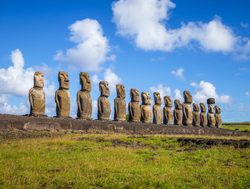 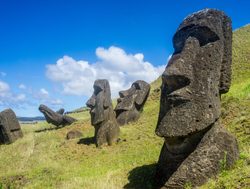 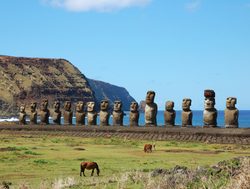 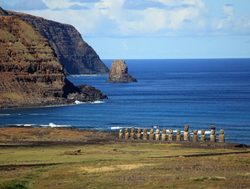 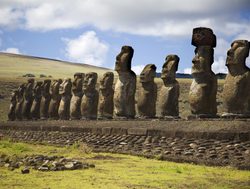 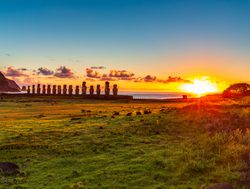 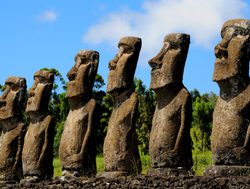 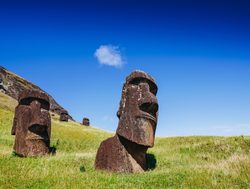 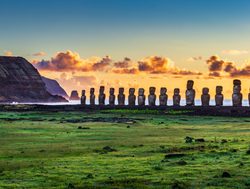 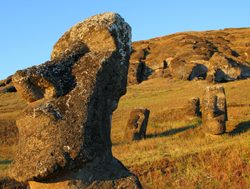 The adventure of flying to Easter Island and experiencing the historical cultural significance is the highlight of the visit.  This island and park represents one of the most isolated places in the world.

The moai are volcanic monolithic figures that have been carved into human-like characters.  They were carved between 1250 and 1500 by the Rapa Nui people.  The park is named after the people.

The moai range in height from 6 to 65 feet (2 to 20 m).  The heaviest one is reportedly weighing 80 tons (160,000 lbs / 72,574 kg). The volcanic rock ash is a dark yellow-brown and are quite pronounced amongst the grass-covered hillsides where they protrude from the ground.

There are 14 trails that traverse throughout the national park providing trekkers with an opportunity to experience both the heritage of the moai statues and the rugged and grass-covered landscapes.

This is an easy rated trail that takes about 1.5 hours to complete.  It features an elevation gain of 413 feet (125.8 m) while covering a distance of 4.0 miles (6.44 km).  Many different views of the historic site and landscapes.

Rapa Nui National Park was created to protect the cultural heritage of the 887 Moai scattered across Easter Island.  In recognition of the cultural significance, UNESCO has declared the area a Worled Heritage Site.  Management and conservation responsibilities have now been turned over to the Rapa Nui local people.  All revenue generated by the park visitors now goes into preservation and protection.

The park protects the nearly 900 moai statues, over 300 ceremonial platforms, and the abundance of other historically and culturally significant structures that represent the culture's life activities.