Chiloe National Park is located on Chiloe Island just off the coast in southern Chile.  The park rests on the western side of the island and encompasses an area of 166.4 square miles (431 sq km).

The majority of the park is accounted for by the mountain range running along the coastline parallel to the Andes Mountains.  This range is known as the Chilean Coastal Range.

The perennial and evergreen trees such as the southern beech and alerce trees make up the Valdivian forest.  Other ecosystems include the bogs and swamps that are located in the foothills.  The Valdivian rainforest is the most prevalent forests in the park.  This vegetation includes shrubs and climbing plants that add to the dense richness of the forests.  Chilean rhubarb is another common part of the flora.

Chiloe Island and the Gulf of Corcovado are renowned because the region is one of four areas where blue whales come and nurse.  The whales are commonly found in the fjords around the gulf.  Along with the blue whales, the region is known for migrating finbacks, seis, southern-right and humpback whales.  Although it is outside the park, some of the whales can be seen close to the shoreline on the south side of the island.

An abundance of sea lions can be found frolicking and sunning amongst the coastal sand dunes.  There is also a colony of penquins which can be viewed by visitors.  There is a diverse collection of coastal birds as well for the bird-watchers to enjoy. 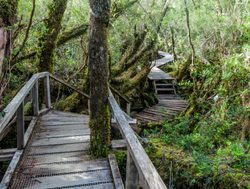 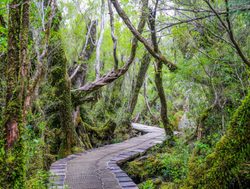 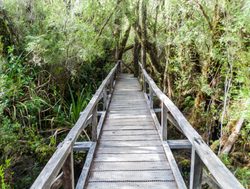 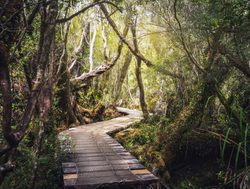 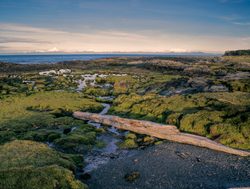 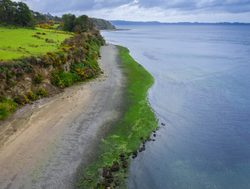 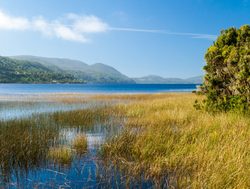 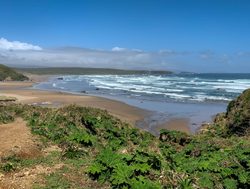 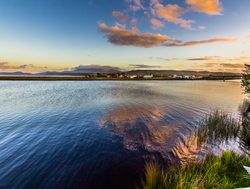 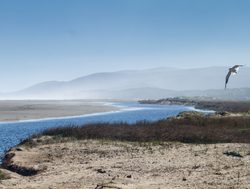 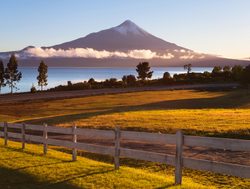 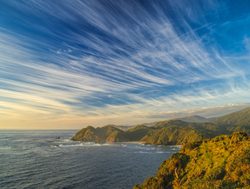 Having the opportunity to witness the world's largest whale and other whales would easily be a highlight for most travelers.  However, the park has more to offer.

Lake Cucao is part of the Chanquin region where the coastal sand dunes are located.  Metalqui Island is another place where the coastline is inviting to wildlife.  Visitors can expect to see sea lions roaming about this coastal paradise.

The marine areas are a great place to see the variety of wildlife that exhists.  It is also some of most beautiful landscapes that are worthy to see.

Many visitors turn to the beach which is an excellent location for walking, horseback-riding, or fishing.

Hiking is one of the more popular activities and there are a fair number of trails to explore.

This is a moderate-rated trail that covers a distance of 7.8 miles (12.55 km) with an elevation gain of 1,633 feet (497.74 m).  The treck meanders through the Valdivian forests offering panoramic views of the beach and coastline.  Part of the journey travels alongside a river.  Potential wildlife spottings include whales offshore and wild horses as you approach the Cole Cole area.

This is a 1.7 mile (2.74 km) easy-rated trail where much of it is wooden walkways.  It has an elevation gain of only 98 feet (29.87 m).  Hikers will travel through the Valdivian forest as the trek through the loop trail which also offers views of Lake Cucao.

This is a short 0.2 mile (0.32 km) loop trail that serves primarily as an introductory trail that provides a discovery time of the vegetation of the park.

Chiloe National Park was created to protect the Valdivian temperate rainforest, the coastal swamps and bogs, and the foothills of the Chilean Coastal Mountain Range.  It protects the coastal waters where the blue whale and other whale species nurse or migrate through.