Terra Nova National Park is located on the northeastern side of Newfoundland. The park covers an area of 154 square miles (399 sq km). It is the furthest most eastern national park in Canada.

The park is comprised of an eastern island boreal forest with facets of the Appalachian Mountains.  The hills are blanketed with the forest except when broken by rock formations.  These forests are comprised of ash, balsam fir, black spruce, varying deciduous trees, maple, mountain ash, tamarack, and white pine.

In addition to the forests, the park also features bogs, ponds, and wetlands. These add to the inland’s variety of vegetation.

Many of the popular species of wildlife include beaver, black bear, caribou, coyote, lynx, red fox, and moose. Ospreys are one of the highlights of the birds which either nest or migrate through the park area.

Marine wildlife includes dolphins, fin whales, harp seals, humpback whales, minke whales, pilot whales, and the orcas which are also known as killer whales.  This is a great place for experiencing a varied collection of both inland and marine wildlife species. 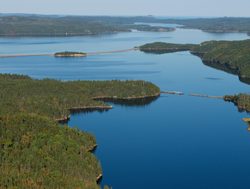 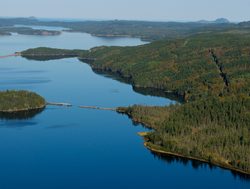 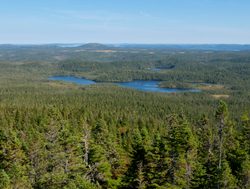 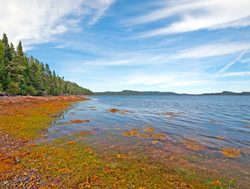 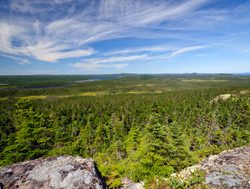 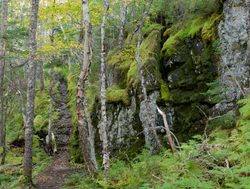 The national park is comprised of varied ecosystems sustaining a variety of wildlife.  There are numerous trails that allow people great opportunities to explore the wilderness.  Enjoying this eclectic collection of natural wilderness and varied wildlife is a highlight for most.

One of the highlights is probably the pristine forests with treks up to hills and lookouts over the various coves, inlets, rock formations, and abundant waterways.

There are numerous trails to explore the back which include both traditional short trails as well as backcountry hiking. The trails also vary rating from easy to more difficult.

This is an easy 2.8-mile (4.51 km) trail along the shoreline and past a scenic waterfall.  The majority of the trail is along the coastline with access to the beach.  It is possible that you may see wildflowers as well as birds and other wildlife. Although it is an easy trail, it can be muddy and rocky along the way.

This is a short 0.1-mile (0.16 km) loop trail out to a lookout tower.  The lookout tower does require that you ascend to the top via stairs, so it is not accessible to everyone.  Once atop the tower, you will have 360-degree panoramic views of the coastline and surrounding area.

Although this is a short 0.9-mile (1.45 km) trail with a minimal ascent, the terrain is more rugged resulting in a moderate rating.  Wildflowers may escort you to the lookout point with scenic views along the way.  The panoramic views from the lookout are astounding.

“After you mylady.”  This is a moderate-rated trail that ascends 826 feet (251.76 m) over 2.5-miles (4.02 km) while trekking up to a lookout over the forested hills and bountiful waterways.  Wildflowers may accompany you along the way as well as scenic vistas.  The panoramic views are the highlight of this excursion into the magnificent wilderness.

This is a more challenging trail with a difficult rating.  You will ascend 3,415 feet (1,041 m) over 20.3 miles (32.67 km) with many different vista views as you trek up toward the top.  From the top, you will have a simple bench to sit mesmerized at the striking panoramic views of the coves, forested hills, and waterways below.