Prince Albert National Park is located right in the middle of Saskatchewan, Canada.  The park covers an area of 1,496 square miles (3,874 sq km).

The elevation of the park varies from 1,601 feet (488 m) on the western side and then rising up to 2,375 feet (724 m) as you move east. The northern part of the park is predominantly blanketed with boreal forest across the rolling hills of the park.

As you move south in the park's boundaries, the terrain becomes a combination of aspen forest and fescue grassland meadows.  The meadow and grasslands help a herd of 400 bison thrive in the area.  The remaining forest is predominantly coniferous forest.

Collectively, the varied forest and grassland vegetation support a variety of ungulates including elk, moose, white-tailed deer, and the already mentioned bison.  The most common predator in the park is the timber wolf followed by the coyote.

Other popular wildlife species include beaver, badger, black bear, red fox, and river otters.  Bald eagle, great blue heron, and the three-toed woodpecker are some of the favorite bird species.

There are a few different scenic drives that traverse across the park providing overlooks and vistas that show views of the lakes, rolling forested hills, and overall terrain of the park. 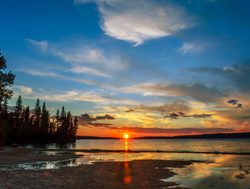 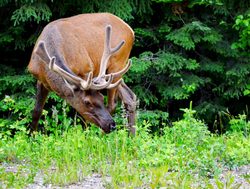 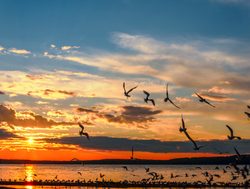 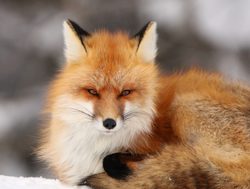 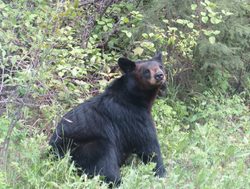 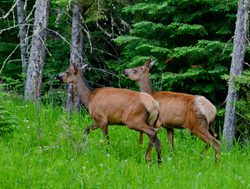 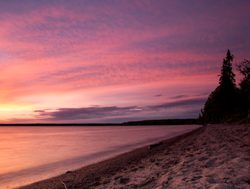 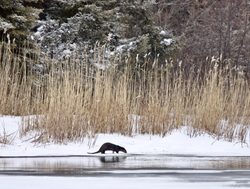 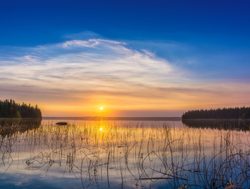 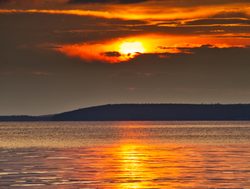 One of the main highlights for many people is having a nice escape into the exquisite wilderness with a chance to see a variety of wildlife.  There is a good chance that bison among other species will be part of your experience.

The aurora borealis is often referred to as the northern lights. These lights are a naturally occurring phenomenon that occurs in both the southern and northern areas as you move closer to the poles.

The aurora borealis is one of the Seven Natural Wonders of the World and people often describe them as one of the most beautiful things they have ever seen.  They display in different ways sometimes as colored waving sheets and other times as dancing lines of light.  The lights can appear in any combination or something in between.

The colors may vary but they most often appear as shades of green. There can be traces of blue or even more reddish colors as well.

There is a whole network of trails ranging from short trails to longer trails for the more adventurous. The trails vary between easy and moderate ratings making it easy for almost everyone to be able to explore the park.

This is an easy 2.1-mile (3.38 km) through the woods and out to a lake.  The out and back trail is relaxing while also offering an escape into nature.

This is an easy rated loop trail circles the peninsula over a 2.1-mile (3.38 km) trek with views of the shoreline and chances to see wildlife along the way.

This is a short 1.5-mile trail (2.41 km) loop trail.  The first portion is boardwalk suggesting an easy trail; however, it does get more difficult as you progress through the woods. The forested terrain and views of the river are the primary attraction.

This is another moderate-rated loop trail.  It has an elevation gain of 528 feet (160.9 m) over 4.3 miles (6.92 km). The trail is rugged and popular for mountain bikers as well.  You will meander through the woods and along a small lake.

This is a more adventurous trail covering 5.4 miles (8.69 km) with an elevation gain of 862 feet (262.74 m). This loop trail provides views out over the forested area as well as lakes below.