Gros Morne National Park is located along the coast of the western side of Newfoundland, Canada. The park covers an area of 697 square miles (1,805 sq km) making it the second-largest national park among the four east coast provinces behind Torngat Mountains National Park.

The heart of the park is comprised of the Long Range Mountains, which are a mountain range shoot off of the Appalachian Mountains. The park features striking fjords, mountains with subalpine and alpine terrain, waterfalls, forests, pristine lakes, beaches bogs, and exquisite coastlines that showcase sea stacks. It is almost like asking what doesn’t Gros Morne have?

Gros Morne National Park is a UNESCO World Heritage Site because of the unique and varied landscapes and natural facets of the region.  The various habitats also create homes for a variety of wildlife.

Arctic fox, black bear, red fox, and lynx are the predator species people hope to see.  Caribou are popular; however, the moose is the most renowned species in the area.  Birds are plentiful and varied based on the coastline, bogs, or woodland habitats.

Offshore and along the coastline, there is a chance to see fin whale, humpback whale, minke whale, and pilot whale as well as harbor seal. There are whale-watching tours available. 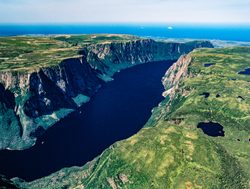 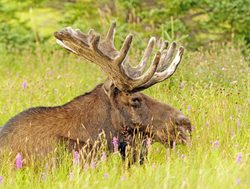 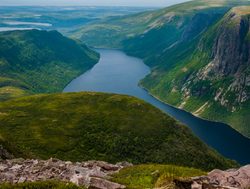 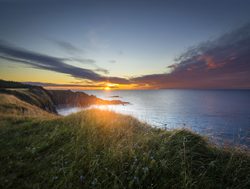 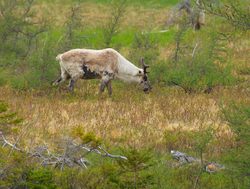 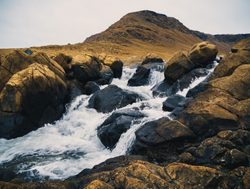 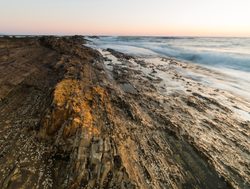 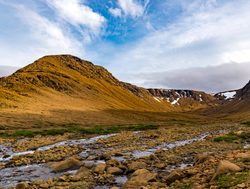 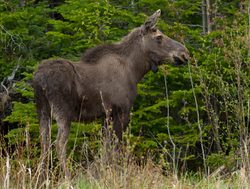 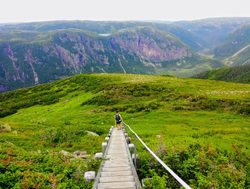 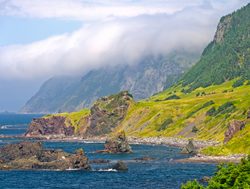 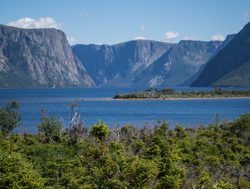 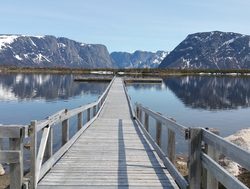 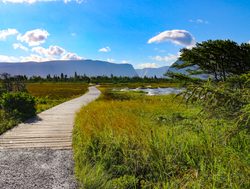 The Gros Morne mountain range features steep sides that are blanketed with vegetation because of the moist coastal air. Although not as dramatic, the coastline with Gros Morne resembles the Napali Coast in Hawaii.

Gros Morne is the second tallest peak in the park; however, it does serve as the namesake of the park.  The peak reaches a summit of 2,644 feet (806 m).

It is a fairly impressive mountain and often inspires people to engage the trail over the mountain. The panoramic views offered from atop Gros Morne are another reason to make the ascent.

Western Brook Pond is actually a freshwater pond that was originally a fjord created by glaciers in the past.  The glaciers eroded the land and gave access to the sea.  However, the land we respond later rising back up and cutting off access to the see creating the pond.

The onetime fjord is now a freshwater pond.  Pissing Mare Falls is the tallest waterfall on the eastern side of North America with the water flowing into the pond.

The water of the pond is pristine and fetches the highest purity rating for any natural body of water.

Gros Morne is one of the perfect locations and backdrops for hiking and exploring the wilderness.  There are all different types of habitat to hike as well as trail levels from easy to difficult.  You will probably be left asking after hiking a trail, “Which one next?”

This is a strenuous 9.9-mile (16 km) hike, also known as the James Callaghan Trail, over the Gros Morne Mountain. People hike the trail for the adventure and challenge as well as the views that are offered along the way.

This is an 8.6-mile (14 km) that meanders through forest and along the pond out to an exquisite part of the Tablelands. There is a chance to see wildlife, so keep your eyes alert.

This is a 5.59-mile (9 km) hike along the astounding coastline with views of sea stacks, rugged cliff coastline, and flowering meadows. This is one of the most popular trails in the park which also features a sea cave and waterfall.

This is a 3.5-mile (5 km) trek to one of the most panoramic lookouts available in the area.  The trail meanders through the forest before reaching a highland plateau.  The plateau lookout provides views of Bonne Bay, Gros Morne Mountain, and the Tablelands. This is another popular trail with magnificent scenery and landscapes.

This is a (9.5 km) trail that meanders through the forest and over the Lomond River bridge.  Many people enjoy this trail in the fall when it displays striking colors across the forest canopy.