Jigme Dorji National Park is located in the far northwest corner of Bhutan.  The park covers an area of 1,666 square miles (4,316 sq km), creating the second largest national park in the country.

The park extends across most of the mountainous Gasa District with elevations running from 4,593 to 24,035 feet (1,400 to 7,326 m).  The striking mountain landscapes are the foundation for the national park.

The mountainous terrain features glacial lakes scattered across the park boundaries.  There are several rivers and waterfalls found throughout the park as well.

The park also displays cultural heritage with approximately 6,500 residents and the historical fortresses of Lingshi Dzong and Gasa Dzong. These historical facets add to the experiences of the national park.

The park is renowned for some of the wildlife species that may possibly be seen, although they are quite elusive.  Some of the most popular wildlife hopeful sightings include the clouded leopard, snow leopard, Indian leopard, Bengal tiger, and the Bhutan takin.  Other wildlife species include black musk deer, black bear, red panda, sambar, barking deer, and the striking spotted linsang.

Birdwatchers are also drawn to the national park with over 300 species of birds that nest or migrate through the park. 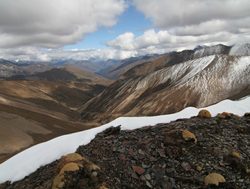 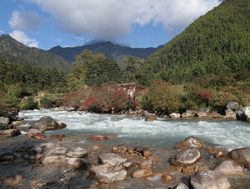 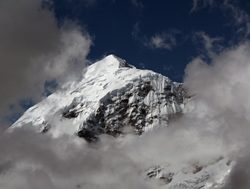 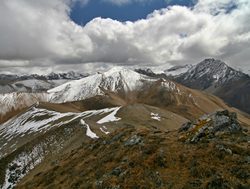 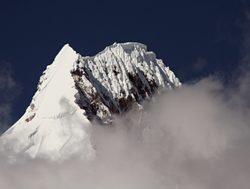 One of the unique characteristics of the park is that you can find the national animal (takin), the national flower (blue poppy), national bird (raven), and national tree (cypress) in the park.  This variety of natural features is a highlight for many.

Mount Jomolharai is affectionately known as the “Bride of Kangchenjunga.”  It reaches a summit of 24,035 feet (7,326 m) and represents the park's highest point.  It is also a sacred mountain to the Tibetan Buddhists, ascribing it as one of the Five Tsheringma Sisters' homes.

Mount Jitchu Drake is another sacred mountain for the Tibetan Buddhists.  It features two separate peaks, with the highest summit reaching a height of 21,857 feet (6,662 m).  Along with Mount Jomolhari, it is considered homes to the local gods.

Lingshi Dzong and Gasa Dzong are both historical fortresses located within the boundaries of the park.  Lingshi Dzong is a Drukpa Kagyu monastery located at (4,150 m) that currently houses around 30 monks.

Gasa Dzong is also known as Gasa Tashi Tongmon Dzong.  It serves as the administrative center for the Gasa Dzongkhag district. It was originally built to thwart invasions from the north.

This is part of the renowned Himalayas, so trekking is expected.  This is high altitude hiking, trekking, and climbing, expecting visitors to be in good physical condition.  This is one of the most popular places to hike and trek throughout the country of Bhutan.  This is often called the trekker's paradise.

This is a challenging one-way trek over 7.4-miles (11.9 km) with an elevation gain of 1,562 feet (476 m).  People embark on this endeavor for the challenge and the scenic mountain landscape views.

This is an out and back trail that covers a distance of 9.3 miles (14.97 km) and features an elevation gain of 2,461 feet (750.11 m).  It is rated difficult but rewarding for those that make the ascent.  Panoramic views of the surrounding mountain area await.

Jigme Dorji National Park was created to protect the snow leopard's habitat, clouded leopard, and the Bengal tiger.  Other species benefit from the protected area as well.  The park also protects a number of endangered species of vegetation.

The park is also one of the places where each of the “national” species may be found in the same location.  The species include national animal (takin), the national flower (blue poppy), national bird (raven), and national tree (cypress) in the park.  This variety of natural features is a highlight for many.

The national park also protects over 300 species of medicinal plants.  The Bhutan government is ensuring that this remarkable landscape and biodiverse habitat is protected for future generations.  The protected area has been declared a UNESCO World Heritage site.