Neusidedler see Seewinkel National Park is located on the eastern side of Austria. The park is situated along the border between Hungary and Austria and just north of the midway point of the country.  The park covers an area of 37.45 square miles (97 sq km) which makes it the third smallest park in Austria.

Lake Neusiedl serves as the foundation of the national park which is also protected by the neighboring Ferto-Hansag National Park in Hungary.  The park sits between the Alps to the west and the Little Hungarian Plains which extend to the east.

The diverse ecosystem includes herding meadows, wild meadows, steppes, salt sites, and wetlands.  This ecosystem ends up being the right habitat resulting in an intertwining of Asian, Mediterranean, northern European, and other species making the area unique for wildlife encounters.

The combined herding and wild meadows mean there is a similar intersection between domestic and wild animals.  Horses, donkeys, Hungarian longhorns, and water buffalos may be seen grazing across these fields with one another.  Some of the outside-the-box creatures that you may or may not hope to see are the Russian tarantula and the fire-bellied toad.

The migrating and nesting birds are a significant part of the biodiversity in the national park.  Some of the popular species found amongst the wetlands and meadows include sea eagles, great bustards, various herons, differing bee-eaters, and spoonbills. 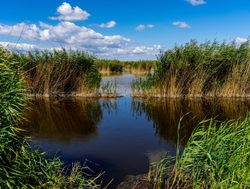 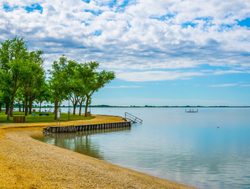 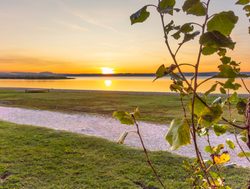 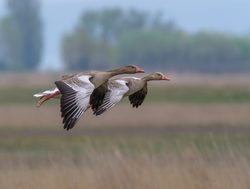 The intersection of wildlife that crosses continents as well as intertwining domestic and wildlife species is one of the unique features of the park and a highlight for some people.  The wetlands, the lake, and soda pools create a diverse experience with the waterways and surrounding landscapes. 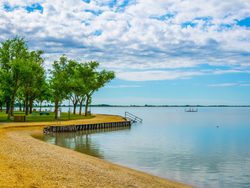 Lake Neusiedl is at the heart of the national park.  The lake covers an area of 122 square miles (315 sq km) which makes it the largest endorheic lake in Central Europe.  The majority of the lake is located in Austria with only 29 square miles (75 sq km) of it stretching over the border into Hungary.

There are towns and villages around the lake some dating back to the Neolithic period creating an encounter with Austrian culture and heritage.

Neusiedler see Seewinkel is not known for hiking like some of the other Austrian national parks, but it is there.  There is an extensive running park located at the lake with 49 recognized trails covering a distance of 236.12 miles (380 km).  Most of the focus is on the lake and surrounding wetlands.

This trail is rated it easy.  It is a loop trail that meanders around the lake with views of the surrounding landscape.  There is an elevation gain of 606 feet (184.7 m) while covering the 6.6-mile (10.62 km) loop.  Birdwatching is the pinnacle attraction of the park with chances to see other wildlife as well as wildflowers.

This is a 10.7 mile (17.22 km) trek that gets into the edges of the Leitha Mountains.  It features an elevation gain of 1,300 feet (396.24 m) and takes about 5 hours to complete.  The trail runs from Breitenbrunn station and travels to Neusiedl.  It is rated intermediate.

This is a loop trail that circles over a distance of 7.75 miles (12.47 km) with minimal elevation gain.  There are views of the lake as your circle around it with chances for birdwatching and seeing other wildlife.  There is an observation tower which provided an elevated view of the surrounding terrain.

Neusiedler see Seewinkel National Park was created to protect a unique ecosystem that serves as the habitat for a diverse collection of wildlife.  In particular, the lake and wetlands serve as a habitat for thousands of migrating and nesting bird species.

The park protects grazing lands for both domestic species and wildlife species that intertwine together eating from the meadow vegetation.