Talampaya National Park is located in the northwestern part of Argentina not far from the border of Chile. The national park encompasses an area of 830 square miles (2,150 sq km) creating the 5th largest national park in the country. Only about 5% of the park is easily accessible to travelers.

Ischigualasto Provincial Park is a neighboring protected area that will hopefully be upgraded to a national park.  Collectively, the two parks are recognized as UNESCO World Heritage Sites because of their extensive collection of fossils from the Triassic Period.

The park is named after the Talampaya River which runs through the park.  The arid and dry climate often results in a dry riverbed.  The barren river bed provides access to dinosaur fossils.  The park is seated at around 4,921 feet (1,500 m) in the montane grasslands of the terrain.

The gorge created by the river results in stunning sandstone landscapes and rock formations.  Some of the walls reach heights of 469 feet (143 m).  The canyon narrows along the way with the most narrowest being only 262 feet (80 m).  This region of the park also reveals petroglyphs from historical people groups.

The park is not renowened for wildlife but there are a variety of species present.  Some of the hopeful sightings include foxes, hares, huanacos, and maras.  For those who appreciate birds, there are different species of condors found amongst the gorge and surrounding terrain. 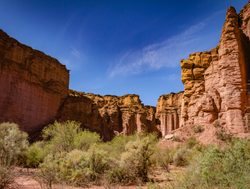 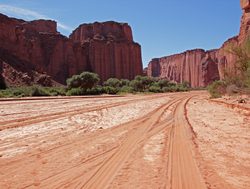 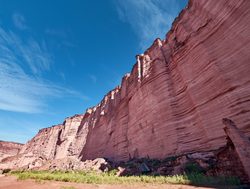 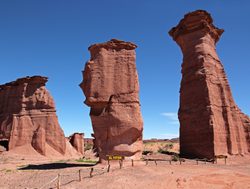 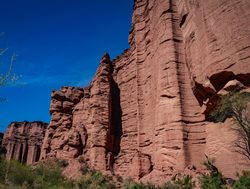 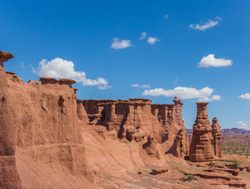 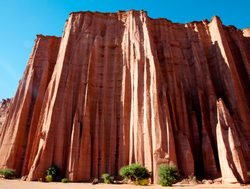 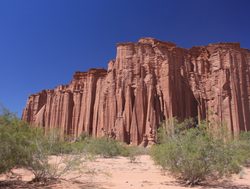 There are six different geological features within the park and combined with the Ischigualasto Provincial Park display the most extensive and complete dinosor fossil record of the Triassic Period.  This record shows the changes of vertebrates, other animals, and vegetation from the palaeoenvironments of the period.

Talampaya National Park was created to protect the high monte ecosystem and the striking landscapes.  Along with the ecological significance, the park also protect the historical facets found in the petroglyphs and the dinosaur fossils found in the dry Talampaya River bed.  The protected area is also recognized as a UNESCO World Heritage Site.

Combined with Ischigualasto, the two parks protect one of the most extensive and complete fossil records from the Triassic Period.  There are six different geological features that display fossil remains.