The coastal park is comprised of stunning sandstone cliffs, varying rock formations, deep beaches, islands off the shoreline, and small bays.  Sandbars and deeper beaches are revealed during low tides.  The park features both steppe and Patagonian biodiversity.

The park also displays archaelogical significance in the caves along the coast where arrows and oyster remains were discovered.  The coastal landscape also displays cliffs, canyons, and other rocky formations.

The park is named after Monte Cabeza de Leon, translated as Lion Head Mount.  The Patagonian steppe is rich in biodiversity that is not initially observed through the arid landscape.  There are several species of coastal grasses.

The wildlife is diverse as well.  Offshore, you might see right whales swimming the waters.  Sea lions and penguins grace the beaches with the country's second largest colony of penguins located in the park.  Cougars and guanacos are some of the mammalian species roaming about the park.  The cougar, locally known as a puma, hunts bothte guanacos and the penguins adding to the uniqueness of park. 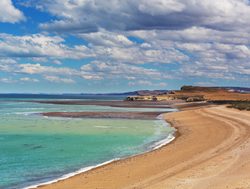 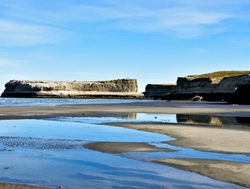 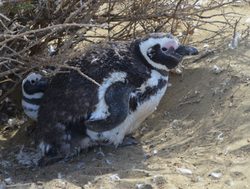 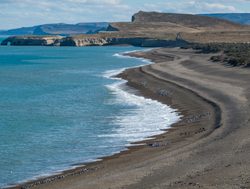 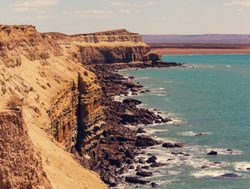 The coastal landscapes are some of the highlights for visitors who explore this southern part of the world.

Penguins are one of the highlights for many travelers.  The national park is home to over 60,000 different penguins creating the country's fourth largest colony. The magellanic penguin is the most prominent of the penguin types.

This is the only place in the world where penguins are hunted by the couger.  Witnessing this unique facet of nature unfold would be an outstanding experience.

There are three species of other flightlless birds include the imperial shag, the rock shag, and the red-legged cormorant.

Monte Leon National Park was created to protect the biodiversity found in the steppe and Patagonian coastal ecosystems.  The park also protects the country's 4th largest penguin population.  It also protects an ecosystem which features the only known ecological region where cougars or pumas hunt penguins.

The park was also created to protect the coastal waters along this part of the country which is home to the right whales and other marine life.