Kafue National Park is located in the central part of the western half of Zambia.  The park covers an area of 8,600 square miles (22,400 sq km) creating the largest national park in Zambia.  It is a GANP Ambassador Park and serves as the second-largest national park across the continent of Africa.

The Kafue River stretches 990 miles (1,600 km) as the longest river found solely within the country.  The park is named after the river that crosses through this region of the country.

Much of the grassy savannas serve as floodplain during the rainy season.  The Kafue River and the Lufupa and Lunga tributaries off of it serve as the waterways that overflow into the floodplains.  These floodwaters are rarely deep covering such a tremendous area.  The soils are also comprised of sandy and loamy compositions giving way to good drainage.

As the floodwaters begin to drain and disappear, it leaves watering holes in areas of the grasslands that are deeper.  The Zambezian flooded grasslands become an ecosystem that is rich with diverse wildlife.  The area becomes an excellent place to watch for wildlife while on safari.

There are 55 different mammalian species roaming about the savanna grasslands and mopane forests.  Predators are almost always the highlight and they are here in full.  Lion, leopard, hyena, cheetah, and Cape wild dogs are all hopeful sightings.

Other popular species include bushbuck, crocodile, duiker, eland, elephant, grysbok, hippopotamus, kudu, lechwe, roan antelope, wildebeest, and zebra.  There is actually a diverse collection of antelope as well as large herds of red lechwe and puku. 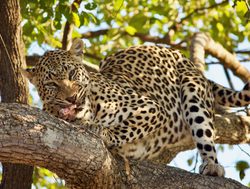 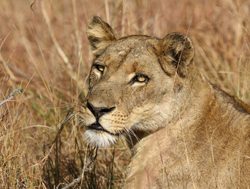 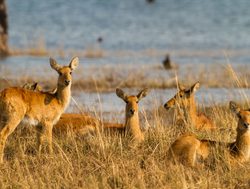 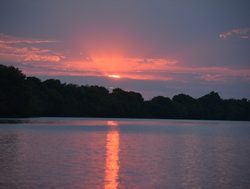 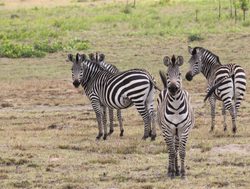 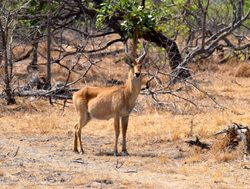 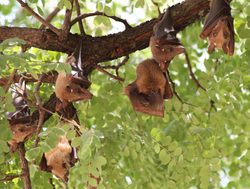 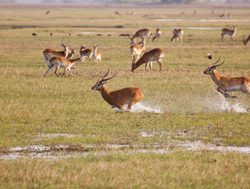 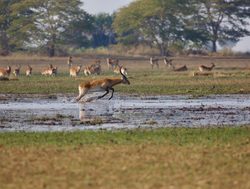 The park is renowned for the large population of red lechwe and puku as well as the variety of antelope that may be experienced while on safari.  The savanna grasslands make it easier to spot and view wildlife.  The wildlife is the pinnacle attraction of the national park whether viewing while on a game drive or from up in the air.

A balloon safari across the savanna grasslands is comparable to that of a balloon safari over Serengeti National Park.  Spotting wildlife from the balloon is fairly easy and readily expected.  The view from a balloon safari is also stellar providing tremendous panoramic views of the terrain. Watching the sunrise as you float across the plains is mesmerizing.

Lions are one the more likely predator species to encounter while on safari.  Prides of lions may easily be lounging about in the savannah grasslands.  Kafue National Park and South Luangwa National Park are both included in the Lion Conservation Unit.

The crocodiles of Kafue are some of the largest crocodiles in southern Africa.  They can be found along the Kafue River sunning on the banks.

The Cape Wild Dogs make for an intriguing wildlife encounter.  They travel and hunt in packs are they are renowned fighters.  Sightings of these wild dogs may be seen in any part of the park.  The national park has one of the healthiest and greatest strongholds of them in the country. 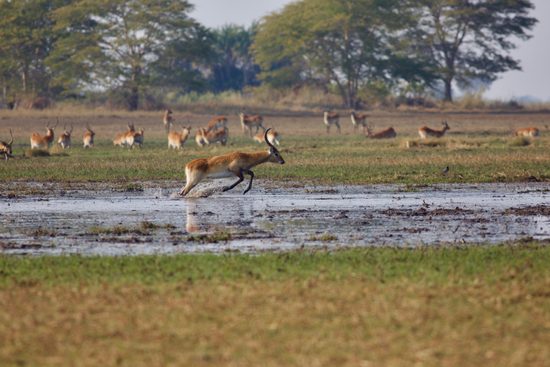 The most popular activity of the national park is the game drive which gives you the best chance to see the greatest variety of animals as well as the the most possible sightings.

One of the unique experiences is the morning balloon ride across the river plains.  Watch the sunrise and see animals below. Take in the astounding panormic view of the landscape below.

Kafue National Park is a wildlife preserve with predators found throughout the park.  There are no hiking trails like many traditional national parks, however, there are chances to hike and experience the terrain and have chances to see animals while on foot.  You can take advantage of one of the guided walking safaris.

Kafue National Park was created to protect a diverse ecosystem grounded on an undulating plateau that is traversed by the Kafue River.  The savanna grasslands, Mopane forests, and riverine vegetation is home to an array of antelope species as well as a large herd of red lechwe.

Although not as robust with wildlife as Lower Zambezi National Park nor South Luangwa National Park, the protected area of the national park is vital to the survival of the wildlife scattered across Zambia’s largest national park.