Sajama National Park was the first national park established in the country, making it the oldest of Bolivia’s protected park areas.  In 2003, it became a UNESCO World Heritage Site reflecting the unique collection of cultural and natural importance.

The national park delivers cultural and natural attractions making the park more appealing to a broader audience.  The Aymara is a local indigenous people group that exhibits historical and cultural facets of their heritage throughout the park.

The Andes serve as the national park's foundation with striking mountain landscapes situated amongst a dry puna ecoregion.  The elevations vary from 13,780 feet to 21,463 feet (4,200 to 6,542 m).

The park is named after the picturesque Sajama Volcano, which is the highest point in the park.  Along with Sajama, there are other volcanic formed mountains and thermal springs, and geysers related to the underlying volcanic activity.

From a cultural and historical perspective, the park features a series of architectural facilities that include historic burial buildings, cave paintings, and some colonial architecture remnants.

The wildlife in the area features llama, vicuna, cougar, bear, and the Andean cat.  Some of the more popular bird species include flamingo, hummingbird, and the coot. 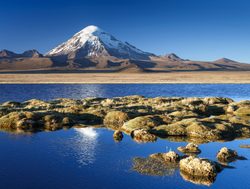 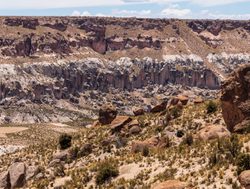 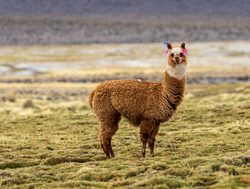 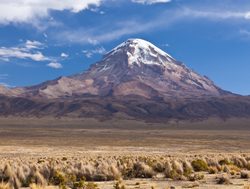 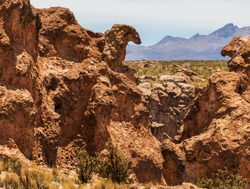 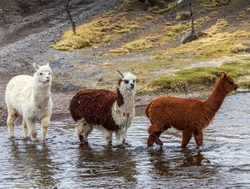 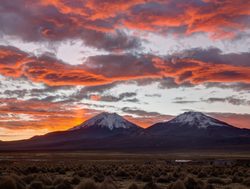 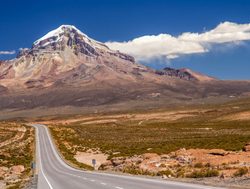 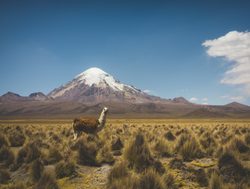 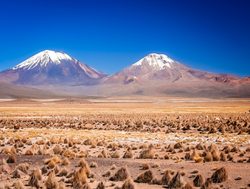 One of the national parks' unique facets is that it delivers cultural, historical, and natural experiences in the same encounter.  The collective nature of the park is what many describe as the highlight of the park.

The park is also situated in the Andes mountains, with the entire park experienced elevations over 13,780 feet (4,200 m).  Sajama is the pinnacle attraction of the park.

Sajama Volcano, also called Nevado Sajama, is an extinct stratovolcano serving as the national park's most popular attraction.  This ice-capped mountain creates one of the most eye-catching landscapes that should be seen by visitors traveling to Bolivia.

Sajama reaches a summit of 21,463 feet (6,542 m), creating the highest point in the national park and Bolivia's entire country.  It rises out of the plains into a fairly symmetrical cone-shaped mountain.

Cerro Huisalla at 16,506 feet (5,031 m) and Huayna Potosi at 16,932 feet (5,161 m) are two additional peaks located are the larger Sajama massif.  It is one of the southernmost mountains in the area where glaciers are found on the mountain.  Glaciers are quite prominent across the mountain, which remains permanently capped with ice.

The lines are presented in a continuous pattern covering a significant area across the Altiplano plateau.  The lines are estimated to cover a distance of 9,942 miles (16,000 km) and are believed to signal historical pathways.

Hiking around the park and climbing or trekking up the various mountains is a popular way to engage the nature of the national park.  There are multiple hikes to visit the various highland lakes.

This is a trail done during a single day while traversing across the park out to views overlooking Lake Huanakota.

This is a two-day hike that traverses through the park providing views of several different attractions.  One of the highlights of the trail is the views of Lake Altura.

This is a more challenging trek that takes hikers to the summit of the Sajama volcano.  Make sure you are in good physical condition and adjusted to the altitude.

Many people access this by 4WD; however, you can take a 5.6-mile (9 km) hike to see and explore the intriguing field.

Sajama protects the Quenoa forests, which are recognized as some of the highest forests in the world.  The park also protects the historical and cultural facets of the Sajama Lines and the artifacts of the Aymara ancestors.