Butrint National Park is located on a small peninsula jetting off the mainland in southern Albania based around the ancient city of Butrint.  The national park encompasses an area of 36.37 square miles (94.2 sq km).

This Albania national park is a special place with a wealth of history, cultural significance, and protection of threatened species.  The park protects natural, semi-natural, and man-made habitats.  It is a historical place that served as a Greek colony, a Roman city, and a bishopric of early Christians.

The small peninsula based national park is comprised of marshes, reed beds, coastal waters, rocky shorelines, sandy beaches, and Mediterranean forests.  In addition to these facets of nature, the national park features ancient Roman ruins and a small Amphitheatre as part of the ruins. It is the ecological lagoon environment where the archaeological gem sits that makes this national park such a treasure.

These ruins are 2,500 years old and some of them are the best-preserved Roman ruins across all of Europe.  The Temple of Asclepius is one of the highlights of the ruins.  Some of the other ruins represent some of the early Christian presence in Albania.

The wildlife of the park includes 39 species of mammals, 246 species of birds, and an abundance of coastal species as well.  Some of the mammals include grey wolf, red fox, golden jackal, otter, and beech marten. 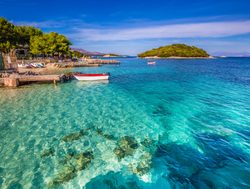 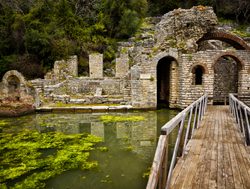 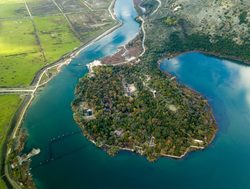 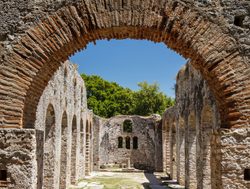 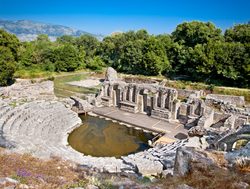 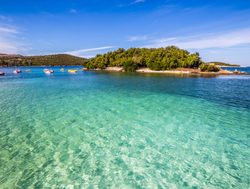 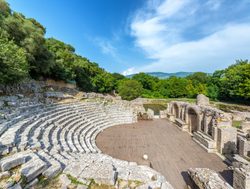 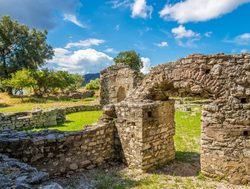 The Temple of Asclepius, amphitheater, and other Roman ruins are some of the best in Europe and a highlight of the national park. This is an uncommon integration of archaeology and natural wonders.

The temple is located on a set of natural terraces where it sits in front of the amphitheater.  The grounds are well cared for and easy to navigate 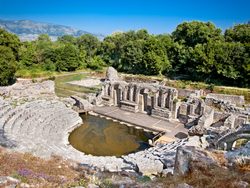 to explore this archaeological treasure from about 3 BC.

The theater was originally constructed with the Greeks in 2 BC and later rebuilt to have more of the Roman influence.  The theater was part of the sanctuary used for religious ceremonies and community forums.  The floor has been boarded over to help with erosion and to protect the site as visitors come through engaging the cultural history.

The park features a network of paths that guide visitors to the various archaeological sites.  The trails lead throughout the town as well as outside the medieval walls that encase the city.  Outside the city area trails will take you to temples, cemeteries, other ruins, and an Ottoman castle. There are also trails with mild elevation changes guiding guests through wetlands, olive groves, and pastureland.

This is a challenging 3.2-mile (5.1 km) that travels up the mountain looking out over the archaeological area below.

Butrint National Park was established by the Alabania government to protect the cultural and historical architecture from the Roman influence.  The park also protects the ecologically pristine blue waters of the lagoon.  The 2,500 year-old ruins are worthy of the national park and UNESCO World Heritage Site status.  The landscapes around the ruins are home to over 39 species of mammals and almost 250 species of birds.

Protecting the envorinment and the cultural history was important to the people and government of Alabania.  Steps are taken to preserve this for future generations.